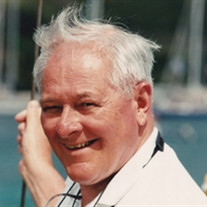 JORDAN A. TRUTHAN was the beloved husband of Karin Humel Truthan (nee Kehl) and the late Jean K. Truthan (nee Knoll) and the dear father of Jeffrey (Jinnie and the late Lynn) of Spokane, WA; Constance Hecker (The late David) of Lynchburg, VA and Charles (Joyce) of Ft. Myers, FL.  He was the dear stepfather of James B. Humel (Maria C.) of Brecksville, OH O; dear grandfather of 13 and great grandfather of five and the brother of the late Edwin J, Jr. and Laurance.

Jordan began his decorating work at William Taylor & Sons in Cleveland, then spent six years at Brewster & Stroud in Chagrin Falls before he started his own interior design firm in December of 1956. He enjoyed many years of adding color, comfort and convenience to all the homes and people he met. Over the years he decorated hundreds of residential homes from Mentor to Strongsville, and as far away as South America and Scotland. His commercial design projects began with the John Carroll University Library, and grew to include offices such as the Jacobs Field Cleveland Indians Owner's Office, and offices in the Seagrams Building in New York City. Even after closing his brick and mortar shop he continued to consult with clients. In his downtime Jordan had a true passion for boating, golfing, and collecting cars. Later in life he developed an interest in photography. He was never caught without his camera at any family event or just a visit with the grandkids and great-grandkids. His passion for perfection and problem solving acumen will be missed by all those who knew him.

PDF Printable Version
To order memorial trees or send flowers to the family in memory of Jordan Truthan, please visit our flower store.