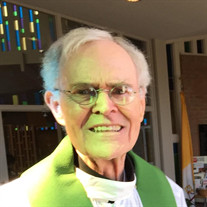 Fr. Wright was ordained in 1978 in Rome, Italy, by his uncle, the late John Cardinal Wright, for whom he was named. Fr. Wright served the Catholic Diocese of Cleveland for 40 years in many capacities. He served as its Financial and Legal Secretary and as the Director of its Catholic Cemeteries Association. Additionally, Fr. Wright served as an Associate Pastor of St. Bernadette Church in Westlake, St. George Lithuanian Church in Cleveland, and Holy Name Parish in Cleveland and as Pastor of the former St. Timothy Catholic Church in Garfield Heights and of Our Lady of Hope Parish in Bedford, from which he retired in 2014.

Fr. Wright was born in Providence, R.I., the son of the late Robert Gerard Wright and the late Rita Hughes Wright. He was raised in Cleveland Heights where the family moved when he was a sophomore in high school. He attended Saint Ignatius High School ('62), Xavier University ('66), Georgetown Law School ('69), and St. Mary Seminary ('78). He then went on to receive a Master of Arts in Community Counseling at John Carroll University ('95). Prior to entering the priesthood, Fr. Wright practiced law as General Counsel for Frasier Mortgage and Management Company, in addition to having a private law practice.

Fr. Wright was known for his compassionate pastoral care and his love for the poor and suffering. In addition to serving his parishioners, he ministered to the needs of the sick at various nursing homes and hospitals by saying Mass and providing grief counseling. He served as Chaplain at Jennings Center for Older Adults and for 10 years, he also said Mass at the racetrack on Saturday nights for the owners, jockeys, and trainers to enable them to meet their Sunday Mass obligation. Serving others was his passion.

Fr. Wright's deep spirituality was fed by his love for nature, the great outdoors, and his family. He loved spending summers with family as a youth at Green Harbor, Massachusetts, and in later years, by the water on Siesta Key and in Boston. He also loved his German Shepherds, spending time with friends skiing, sailing, and golfing, as well as reading and listening to music.

Fr. Wright will be dearly missed for his wise counsel, his dry sense of humor, and his wonderful homilies that were "just long enough".