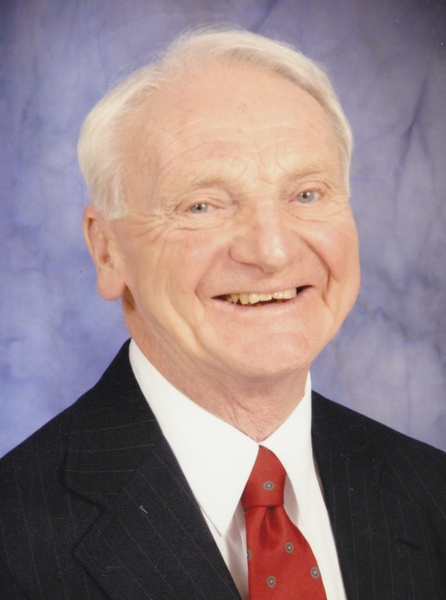 John C. Sague, known as “Jack”, was born in Cleveland, Ohio on May 28, 1921. He spent his youth in Shaker Heights. He attended Cathedral Latin High School where he was best known for his prowess on the football field. As a star running back, he helped his team win the annual Charity Game at the Cleveland Municipal Stadium. When World War II began, Jack enlisted in the Marine Corps. He served in the Pacific theater under Admiral Halsey and was part of his personal detail. At the end of the war, he was serving aboard the USS Missouri and witnessed the formal surrender of the Japanese empire.

He returned from the war to marry and raise 6 children, Meaveen O’Connor, Tim (deceased), Beth (Frank) DeGaetano, Brian, Barry (Matea) and Shawn.  He had 7 grand children, Amy and Tom DeGaetano, Jonathan and Jaime Sague, Kaytlyn O’Connor and Valerie and Lindsay Sague. He had 3 great grandchildren, Theo and Quinn Thompson and Elizabeth Woods. He worked in the insurance and church supply business.

Jack happily spent the last 25 years of his life with his wife Marie (Irr) Sague, who passed away earlier this year. They shared a love of ice skating, traveling and enjoyed long walks in their Shaker Heights neighborhood. They were long time members of the Cleveland Skating Club and devoted members of St. Dominic’s Catholic Church.

Jack was well known for his booming voice and outgoing friendly nature, that will be remembered by all who came in contact by him.

In lieu of flowers, contributions may be sent to Catholic Charities.  A Memorial Mass will be held on Saturday, December 8, 2018 at 10:30 AM at St. Dominic’s Church, 19000 Van Aken Blvd., Shaker Heights, Ohio 44122. A Luncheon at St. Dominic’s will immediately follow the service.