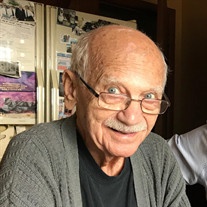 
John was a 1940 Graduate of John Adams High School, attended Ohio University and was drafted in his senior year. He was an illustrious and brave cannoneer in the 20th Armored Division of Patton's infantry in Central Europe. Their mission was to find Hitler; they liberated three concentration camps, including Dachau. He returned home to take over the family business, the Pin Wheel Lounge; marry Julie on Nov. 21, 1949; open the Inner Lobby Coffee Shoppe in the Rockefeller Bldg.; purchase and operate the Lincoln Inn with children Joan and John; and helped at their latest venture, J. Pistone Market. John was a proud member of Saint Dominic Parish for 56 years, which all five of his children attended and graduated from. "Johnny Blue Eyes" will always be remembered for the amazing garden that he started from seeds, fishing, hard work, generosity, integrity, and the spirit of hospitality that invited so many to his Rexway Road home, his restaurants, and their Put in Bay trailer. The family wishes to thank John's incredible caregivers: Alma, Marge, Yvonne and Doris, and the Hospice of the Western Reserve, for making his last years comfortable and safe.

At John's request, no calling hours will be observed. A Mass of the Resurrection will be celebrated at Saint Dominic Church, 19000 Van Aken Blvd., Shaker Heights, Ohio, on Monday, February 12, at 11:00 a.m. The family will greet friends and family at the Church one hour before the Mass. Private Burial will be at a later date, where he will be laid to rest next to his beloved Julie. In lieu of flowers, the family requests donations to Hospice of the Western Reserve, the Monuments Men Foundation, monumentsmenfoundation.org, or Saint Dominic Church.