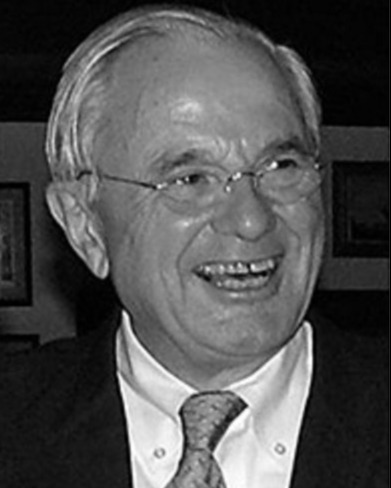 John Carrington Morley, age 91, of Cleveland Heights, Ohio, passed away peacefully at home on November 30, 2022 in the company of loving members of his family. John was born in Saginaw, Michigan on August 22, 1931, graduated from Middlesex School in 1950, earned a Bachelor of Arts in History from Yale University in 1954, and a Master of Business Administration from the University of Michigan Ross School of Business in 1958. He served in the United States Navy from 1954 to 1956 as a Lieutenant Junior Grade on the USS Mount Baker. John is reunited with his beloved wife of 60 years, Sally Spence Morley, who passed away in 2014. John began dating Sally, an acquaintance from Saginaw, while he was attending Yale University, and they were married in 1954, commencing their sixty-year adventure through life together. They raised six sons, living at various times in Ann Arbor, MI; Oakland, CA; Cos Cob and Greenwich, CT; Lima, Peru; Miami and Coral Gables, FL; Athens, Greece; Houston, TX; and Cleveland, OH, where they lived since 1981.

John was a vibrant, loving and caring husband, father, grandfather, great-grandfather, brother, uncle and friend. He selflessly devoted himself to his family, friends and communities. John was committed to staying well-connected to his large, extended family and always made time for everyone, often with lots of conversation, laughter, smiling and singing involved. He was a tremendous mentor and counselor, enriching the lives of all those he touched. Friendships meant the world to John, and he actively nurtured and deepened his countless friendships from the many facets of his life. John cherished visiting with family and friends at Higgins Lake, MI, where he spent time nearly every summer of his life, and in Ft. Lauderdale, FL, where he spent time nearly all of the past fifty winters. John was a deeply spiritual, life-long Christian, most recently as a long-standing member of St. Paul’s Episcopal Church in Cleveland Heights. Throughout his life, John enjoyed numerous outdoor activities including sailing, tennis, skiing, golfing and hunting.

John’s energy, talent and commitment extended to his professional, volunteer and philanthropic endeavors as well. He became the CEO of Reliance Electric Company in Cleveland in 1980, after Reliance was acquired by Exxon Corporation, and served in that capacity until 1995 when Reliance was acquired. In 1986, John led an investor group in the leveraged acquisition of Reliance from Exxon and took Reliance public in 1992. For 23 years prior to joining Reliance, John held a number of executive positions with Exxon, including President of Exxon Chemical USA and Senior Vice President of Exxon USA. He was a director of numerous private and public corporations, including Cleveland-Cliffs Inc., AMP Inc., Ferro Corp., KeyCorp, and Lamson & Sessions. John served on many non-profit boards including University Hospitals of Cleveland/Case Medical Center, the Cleveland Orchestra, Case Western Reserve University, University of Michigan Ross School of Business Visiting Committee and Middlesex School. John and Sally were generous and visionary philanthropists with a particular focus on education, healthcare and the arts.

John is survived by his six sons and their families: John C. Morley, Jr. of St. Paul, MN and his four sons, Andrew, James and his wife Derly, John Whitney and Peter; Spence G. Morley of St. Paul, MN and his three children, Matthew and his wife Heather and son Stuart, Catherine, and Stuart; David P. Morley of Austin, TX, his wife, Anne, and their two daughters, Jennifer Burner and her husband Clay Burner and daughter Janie, and Kristin; Andrew W. Morley of Boulder, CO, his wife, Rebecca, and their three sons, Thomas, Tyler and Cameron; James B. Morley of Austin, TX and his son, Austin; and Thomas M. Morley of Shaker Heights, OH, his wife, Kelly, and their five children, Jeffrey, Sadie, Henry, Josie Ross and Sophie Ross.

A memorial service will be held at St. Paul’s Episcopal Church in Cleveland Heights, Ohio on Saturday, February 25, 2023, at 3pm.