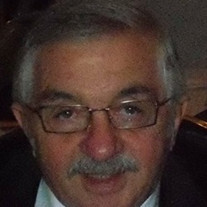 John Anthony Lombardi was the eldest of three children born in Yonkers, New York to his proud parents, Rocco and Virginia Lombardi on February 6, 1937. He proudly served in the United States Marines Corps during the Korean War. After being honorably discharged from the Marines, he moved to Naples, Florida and married. Out of that union a son, Rocco, was born in 1968. He helped manage his parents' restaurant where he served as Chef, Bartender and was in charge of purchasing high quality foods and supplies that helped make the restaurant a successful business.

He later relocated to Dallas, Texas and he became an entrepreneur, creating a company that cleaned apartment suites to get them ready for the next occupant. This is where the fairy tale story begins.

When John saw Brenda while she was on a business trip in Dallas in July 1985, "it was love at first sight". He courted her by taking her to dinner. Brenda gave John her business card, welcoming him to look her up if he was ever in town. One month later, he packed up his yellow Cadillac and relocated to Cleveland, Ohio, where Brenda resided. Their theme song was Pink Cadillac by Aretha Franklin. In short order, he was introduced to her children, Evonne and Ricardo who were 16 and 4, respectively. To hear her children describe their first meeting with John, "it was love at first sight" for them as well. John continued to raise them as his own until his death. In 1989 John, Brenda, Norma (Brenda's mother) and Brenda's aunt, Jo, traveled to Las Vegas. It was in Vegas where John,much to Brenda's surprise, arranged for them to marry at the Justice of the Peace, downtown. Soon after his relocation, John quickly found employment in Cleveland, Ohio as a bartender, home improvement sales associate and eventually became an independent truck driver. He retired in January 2006 and in his spare time, he became a school Lunch Aide in the Orange School District. He then transferred to the Shaker School system where he became a Crossing Guard at Lomond Elementary and experienced his second retirement.

John enjoyed and developed memorable relationships with young people. He was a proud uncle of Anthony Bisesi, son of his sister Angela and John Bisesi. They spent a lot of time together and had many happy memories. John was like a second father to Anthony. In 1996, he was happy to hear of the birth of his granddaughter, Alana, from his son Rocco. He and Brenda traveled to Florida to attend her baptism. John often visited his son and granddaughter when he drove his truck to Minnesota.His grandson, Xavier, son of his daughter Evonne, was born in 1998. John helped raise him. The two were inseparable. John was considered to be the father figure in Xavier's life, teaching him many things and sharing his wisdom. Xavier and John loved to travel and watch the food channel. One of the most memorable trips for all of them was when they took the grandchildren (Alana and Xavier) to Disney World.

John, the unofficial mayor of Avalon Road, will be best remembered for his gracious and generous hospitality and love for others. You never left his house hungry or thirsty. He always made Thanksgiving and Christmas Brunch memorable.


PDF Printable Version
To order memorial trees or send flowers to the family in memory of John Lombardi, please visit our flower store.