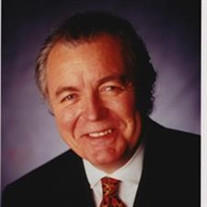 It is with deep sadness that the family of John N. Lauer announces his passing on February 23, 2018. He had just turned 79, and by anyone's measure, lived a full, adventurous, impactful, incredible life. During the last eight months of his life he waged a heroic battle against cancer. He died at home, surrounded by his loving family.

He was born in 1939 in Washington, DC to Clarence and Louise Lauer and was the beloved big brother of Ann Lauer Kennedy. As was typical in that era, he grew up living within several blocks of most of his relatives. As many of the men fought in World War II, the women of the family raised the children together. John was an active Scout and athlete at Northwestern High School, and served in the Army Reserves between 1956-1963. He attended the University of Maryland where he received a B.S. in Chemical Engineering in 1963. That same year he married Edith Kish, who had emigrated in 1957 from Hungary. They began their 54 year-long marriage in Kingsville, Texas and subsequently moved to ten other locations in the U.S. and Europe where John pursued his career.

They had two daughters: Kriszta Lauer Nagy (Robert) of Plano, TX, and Andrea Lauer Rice (Barton) of Roswell, GA; two beloved grandchildren - Nicholas and John Patrick. John was the cherished uncle to many nieces and nephews and godchildren.

In 1969, John earned an MBA from Texas A&M University, in Kingsville, TX.

He had a long and distinguished business career beginning at Celanese Corp. as a young chemical engineer where he was known as a troubleshooter. In 1987, John was a top executive when the company was bought by the German Hoechst AG. Two years later, he moved to Cleveland, OH to serve as President and COO of BF Goodrich. In 1997, he became President and Chairman of Oglebay Norton Company, where he created a unique performance-based executive compensation plan. After joining the Diebold Board of Directors in 1992, he served as the Non-Executive Chairman from 2005 until his retirement in 2013.

During this time, Lauer also served on several non-profit boards including the Visiting Nurses Association, The Cleveland Opera, and The Moreland Courts Condominium Association. He was an avid supporter of arts and culture throughout his life. In 2000 he was a co-founder of the University of Maryland College Park Foundation for the benefit of his beloved alma mater, eventually serving as its Chairman. He remained a devoted member and was an active leader of the Board for many years of the Sigma Alpha Epsilon National Fraternity.

In 2016, he joined the Board of The Phillips Collection in Washington, DC, as a liaison with the University of Maryland.

Because of his strong commitment to higher education, Lauer established The John N. Lauer Banneker/Key Scholarship at the University of Maryland in 1997 that provides merit-based awards for outstanding students who pursue science.

Due to his wife's Hungarian background, after the fall of communism in 1989, he gained thorough first-hand knowledge of Hungary, Romania and Slovakia through dozens of visits to the region. Named an Honorary Hungarian in 1993 by Hungarian Ambassador Pal Tar, he was an active supporter of many Hungarian causes and organizations, primarily the Washington-based Hungarian American Coalition. The Lauer Family's Pannonius Foundation provided major support for educational and cultural projects such as the Godparents' Program for students of the Hungarian Reformed Kollegium of Kolozsvar in Romania, and the Madach Posonium Publishers and the Posonium Literary Awards in Slovakia.

John Lauer was an avid fisherman, hunter and enthusiastic world traveler with a special interest in Mayan civilization and culture, the American Civil War and the European battlefields of WW I and II. He published extensive travelogues of his trips and had a keen interest in ancestry. He loved the opera, was a gourmet chef and a voracious reader. He was happiest when surrounded by family and friends, and was actively involved in the education and accomplishments of his grandsons. All those whose lives he touched, especially the young people in the US and Europe, have been inspired by his example and will keep his memory alive.

The Lauer family is grateful to the doctors and nurses of the Cleveland Clinic Taussig Cancer Center and Hospice of the Western Reserve for their outstanding care.

A Memorial Service will be held at The Cleveland Institute of Music at 4:30 PM on Saturday, March 17, 2018. A Celebration of Life will take place at the University of Maryland Memorial Chapel at 10:30 AM on Saturday, April 14, 2018.

In lieu of flowers, memorial contributions can be made to UMCP Foundation, Inc. 4603 Calvert Road, College Park, MD, 20740 - please note "Lauer Banneker/Key Scholarship" on check or go to http://go.umd.edu/lauer or to the Sigma Alpha Epsilon National Fraternity, 1856 Sheridan Road, Evanston, IL 60201- 3837 with "John N Lauer Excellence in Leadership Award" noted on check or go to https://saefoundation.givingfuel.com/johnlaueraward
To order memorial trees or send flowers to the family in memory of John Lauer, please visit our flower store.