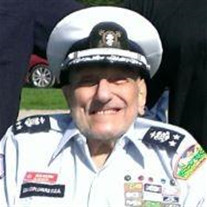 In lieu of flowers, contributions may be made in his name to The Boys Scouts of America, 2241 Woodland Ave, Cleveland, OH 44115. Funeral Services will be held at 10:30 am on Saturday, October 15th at St. Paul's Episcopal Church, 2747 Fairmount Blvd, Cleveland Hts., OH. Inurnment, St. Mary's Cemetery, Hanover Township, PA.

The following is a tribute provided by The Greater Cleveland Council:

Scouting was a lifelong adventure for Eagle Scout John B. Guerra. John earned his Eagle Scout Award with 1 Palm in 1945 in the Wyoming Valley Council in Wilkes Barre, PA. As an adult, John mentored Scouts and Scouters alike. He served as Scoutmaster for Troop 22, chartered to St. Paul's Episcopal Church in Cleveland Heights, from 1979-1989. His goal was to help Scouts strive for the best in themselves, using the patrol method as a guide.

In addition to the time and talents he has shared with youth and adults alike, Mr. Guerra made numerous monetary gifts to the Greater Cleveland Council. His first endowment gift of $1,000 (James E. West Fellowship) was in 2009. Additional gifts included annual five figure gifts to pay for low income Scouts to attend summer camp at Beaumont Scout Reservation. This past March, John gave $100,000 to construct the Guerra Arts Center at Beaumont. This building will allow numerous merit badges to be offered simultaneously. It will also provide display space for sculptures, art work, and railroad and war model re-creations, donated by Mr. Guerra. Construction began August 22, 2016 and is projected be finished by the end of October.

In August, John signed a bequest for a $1 million gift to the Greater Cleveland Council! When realized, the gift will be split four ways: $200,000 to renovate two troop lodges at Beaumont. It will be renamed and dedicated to the memory of William Hillcourt, Scoutmaster to the World.

The remaining $800,000 will be used to create the following endowment funds in the permanently restricted Greater Cleveland Council, Boy Scouts of America Endowment Fund:

John B. Guerra Fund for New Boy Scout Troop Formation (25% of the endowed bequest)
The income generated by this fund will offset the startup costs of the formation of new Boy Scout troops in low income areas within the Greater Cleveland Council.

Recognizing that high-quality human assets are critical to superior program, the income generated by this fund will supplement the salary paid to certain camp staff members selected by the Council due to their ability and performance.

John B. Guerra Marketing Fund (50% of the endowed bequest)

Income generated by this fund will fund the salary of a permanent, part time marketing/public relations specialist. This individual will promote, communicate and celebrate the value of Scouting to members, communities and donors. Week in and week out, local Scouting stories will appear in local and regional newspapers, as well as any other relevant electronic and social media platforms.

John's legacy will contribute minimum annual cash gifts of $40,000 to fund these initiatives.

As a Scout in Troop 43 in Wilkes Barre, John's troop had six patrols, a drill team and a bugle core. John was a member of the bugle core. He played the "echo" during ceremonies recognizing World War II military personal. As an adult, John was an Assistant Scoutmaster for his troop while attending college until he left for Cleveland in 1951. During that same time, John served as a Mate for Sea Scout Ship 4.

John graduated from Wilkes University in 1948 with a B.S. in Economics. He eventually traveled to Cleveland to visit his sister. He lived with his sister and brother-in-law as housing was scarce after the war. When his 11 year old nephew joined Boy Scouts, John became an Assistant Scoutmaster of Troop 106 in Shaker Heights. After a year, he became the Scoutmaster. Four of the his Scouts were on the trail to Eagle, when John left five years later due to the demands of working full time at Sohio and attending law school in the evenings. John graduated from Cleveland Marshal Law School with a J.D. in 1957. He spent the remainder of his career Central National Bank as a Senior Trust Officer and Assistant to the President. He retired in 1982. In "retirement" he practiced law part time, specializing in taxes (he liked challenging the IRS) and estate planning. He was also able to devote more time to Scouting.

One of his favorite memories was watching a couple of Tenderfoot Scouts trying to start a fire. They went through match after match, unable to start a fire. John could tell that their tinder was too thick. He finally walked over from his campsite and showed them how to start a fire. A year later, he watched the same group of Scouts start a fire in the rain with one match! He loved seeing the "aha moments" in Scouts he worked with.

In the late 80's, John's love of the water called him. He started Sea Scout Ship 4-0, chartered by Ohio Division of Watercraft. As Skipper, John ensured many opportunities for camping and sailing for his Scouts. Lake Pymatuning was a favorite spot to sail and camp.

Over the years, John used his time and talent to serve Scouting in many positions. Training Scouters was a passion of his. One of his favorite assignments was Scoutmaster for the 1985 National Jamboree. John received his Wood Badge beads as a member of the Beaver Patrol and was honored with the Silver Beaver Award in 1988.

It was John's wish to help future generations of Scouts with these gifts. He hoped that his gifts "will inspire others to consider making gifts to the capital campaign or the endowment fund at any level. In the end, it's all for the boys!"


To order memorial trees or send flowers to the family in memory of John Guerra, please visit our flower store.