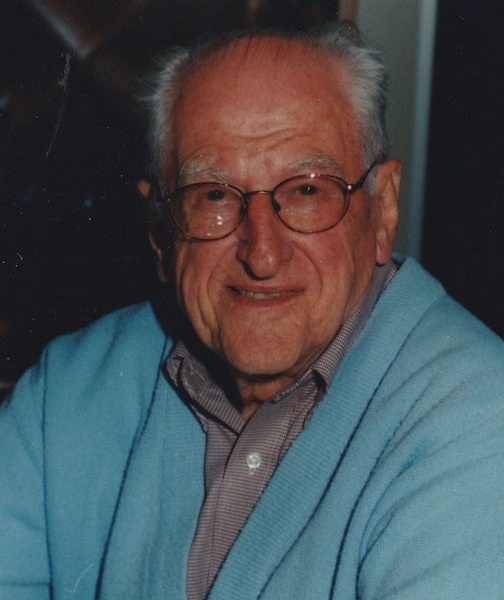 John Chrien was born in Cleveland, Ohio on October 24th 1919. He graduated from Thomas Jefferson Jr. High in 1933 and West Tech High School in 1937. He was retired from Service Station Equipment Co. (DBA SSECO Solutions), the family company he founded in 1961.

He was preceded in death by his parents Frederick and Anna (Goraz) Chrien, his wife Ruth (Tisdall) and three brothers  Andrew, Bill and Robert.

During school, John was a stenographer and sports editor for the school newspaper, and after graduation used these skills while employed at the U.S. Housing Authority. John escorted Eleanor Roosevelt on her visit to the Lakeview Terrace Apartments project and took notes for her. The Lakeview Terrace Apartments, Cedar-Central and Outhwaite projects were among the first public housing projects built in the US.   John became a manager for the Cedar-Central apartments under the Cleveland Metropolitan Housing Authority from 1937 until 1942.

During the war years (1942-1945), John worked at the GMC Cleveland Engine Division that made engines and parts for submarines. Following the war, he built his early career in Cleveland at AMCO Corp, a Chicago-based national petroleum equipment distribution business in the US and established the Cleveland office as the Branch Manager. He successfully grew this office over the next 15 years.

In 1961, he founded his own company, Service Station Equipment Co. (DBA SSECO Solutions), which continues in business today led by his son, David and David’s wife Diana McDevitt Chrien. John found innovative ways to modernize equipment and installations methods in an industry that was rapidly growing and changing. He loved solving his customer's problems and this in addition to his strong work ethic led in great part to his success. While leading SSECO, John developed and marketed the first “prefabricated trench drain” in the US.  John started Preform Trench Drain Co LLC in 1970. John was a member of Ohio Petroleum Marketer Association and Petroleum Equipment Institute until his retirement.

John’s love for his business was balanced by his dedication to the sports of roller and ice skating.  John and his wife, Ruth, who were married for 53 years before Ruth’s passing in 1998, were national roller skating partners, and later became national roller judges from 1942 thru 1960.

John met Ruth at the Rollercade rink in Cleveland in 1940. They were part of the precision skating team that performed in Madison Square Garden in 1944 for a fund raising event. In 1945, they placed first in Cleveland’s Intermediate Dance Championship, subsequently placing Second in the state, and third in the Regional Intermediate Championships. John and Ruth also became involved in ice figure skating in 1962 when their children, David and Myra began skating.  David and Myra became US National Dance Competitors and US National Medalists from 1970-1976. John's granddaughter, Lauren Chrien Brown, continued the family legacy by competing in ice dance at the national level.

John and Ruth’s interest in roller skating went beyond competing to encouraging and mentoring other skaters and enhancing the sport and art of skating. John and Ruth were Charter Members of the Judges Panel #1 and John served many terms as panel chairman while Ruth served several terms as secretary.  The Chriens judged for skating proficiency tests and skating competitions at all levels: local, regional, and national.   They served as judges for the first Black National Championships and helped other rinks set up judging panels.

With their children heavily involved in competitive ice figure skating, John and Ruth turned their skating judging skills to ice skating.  Both became judges with Ruth the longest serving junior judge in the US.  John was an Official National Referee for the 2000 US Championships in Cleveland. He was a very active judge in the Great Lakes Region for many years assisting young skaters to successfully compete in national competitions.  John was also the first president of the Greater Cleveland Council of Figure Skating Clubs and a past president of Tri State Figure Skating Council.

John served the US Figure Skating Association (USFSA) in many official capacities volunteering as a National Referee, National Accountant, and National Judge. In 2014 he was named Honorary Official in these capacities after 40 years of highly recognized Officiating Duties in the USFSA. John also judged the Houston Invitational Competition from 2000 to 2006 in Houston, Texas, joining his daughter Myra in these activities.

John and Ruth became members of the Cleveland Skating Club in 1973 and enjoyed participating in curling, ice shows, socializing and all things related to skating.  John was a recipient of the Cody award for his outstanding contributions to figure skating and remained active at the CSC until 2010.

A particular passion of John’s was Precision or ‘Synchronized’ Skating (Team Skating) on ice.  He judged extensively for this event on ice.   He then became heavily involved in translating the ice choreography to roller precision team skating.

John served as team choreographer to the Brookpark (Ohio) Elite Precision roller Skating Team who won two consecutive national championships.  John traveled with the team to Australia and later to Argentina as team choreographer translating many of the difficult moves he judged on ice to rollers.  In 2004, John received his “40 Year Judge” pin from the USFSA and also awarded the designation “World Class Choreographer” by the United States Roller Association.

John and Ruth loved to travel. They visited Europe, Latin America, and traveled throughout the US.

John was a devoted father, supporting his children via his participation in school boards/committees, coaching baseball and numerous  organizations in addition to skating. He also enjoyed spending time with his grandchildren, boating and fishing at the family lake house, tinkering and finding interesting tools and gadgets to add to his collection.

John was a member of Divinity Lutheran Church for many years , he later joined Gesu Catholic Church where he was a full member until his passing.

In lieu  of flowers, donations may be made to the United States Skating Association, Attn: Memorial Fund, 20 First Street, Colorado Springs, CO 80903 or online at 1961MemorialFund.com