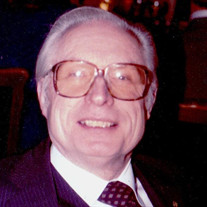 John L. "Jack" Benish passed away peacefully at age 92 on September 26, 2016 in Cleveland Heights, Ohio surrounded by his wife Betty and children Bill, Lisa, and Nancy. Born December 12, 1923 to Arthur F. and Amy (Stephens) Benish in Detroit, Michigan, he attended Pattengill School and then Mackenzie High School. At MacKenzie, Jack was active in the Radio Unit where he met his future wife, Betty Armstrong. Jack attended Wayne State University and as a sophomore enlisted in the US Army. He was sent to the Citadel Military College in South Carolina for one year and then to Europe with the Engineering Corps. Upon his return, Jack and Betty were married at Nardin Park Methodist Church in 1947. He completed his degree at Wayne State in 1949, obtaining a BS in Electrical Engineering.

Jack's first position was at the KaiserFrazer plant near Detroit producing Flying Boxcars. When the company moved to California, he took a sales position at American Standard in Detroit working for Lester Lee. Encouraged to start his own business, Jack launched Hydronic Supply and Engineering in 1958 with partners Bob and Mike Belenky, operating from a small warehouse in Berkley, Michigan. In 1964, Jack moved the growing company to larger quarters in Troy, MI. In 1991, he sold the company to his trusted associate, Mike Mauer.

As a small boy, Jack attended Rotary Club Christmas parties with his Uncle John Stephens and in 1956 became a Rotarian himself. Jack was very active in the Berkley Rotary Club and when his business moved to Troy, joined the Birmingham Rotary Club, playing piano for his fellow Rotarians. Jack had 58 years of perfect attendance in Rotary and was also a member of the Rotary Club in Petoskey, Michigan where he and Betty spent their summers since 1972 in nearby Bay View.

In retirement, Jack enjoyed playing tennis, taking organ lessons, working on their cottage ("The Old Rooming House") in Bay View, and most of all, enjoying the many friends he loved in Bay View, lifelong friendships made in Rosedale Park, in hometown of Bloomfield Hills, at The First United Methodist Church in Birmingham as well as the many classmates and associates he maintained since childhood. Jack also enjoyed organizing all of the Mackenzie High School reunions over many years until his last, their 70th, in 2011.

He was a lifelong and devoted member of the United Methodist Church. Jack and Betty were married for 69 loving and joyful years; they had three children, Bill Benish (Janet), Lisa Wadsworth (Tom) and Nancy Foster (Jim). Jack is much beloved by his grandchildren and will be deeply missed by Rachel Benish (Joe), Amy Wadsworth (David), Will Benish (Carly), Rebekah Benish (Peter), Rebekah Wadsworth, Lydia Benish, Hannah Foster (Ian), Laura Wadsworth, Jack Foster, and Peter Foster. Donations in memory of Jack to Hopital Bon Samaritain ( http://www.hbslimbe.org ) in Haiti would be most appreciated and gratefully received.