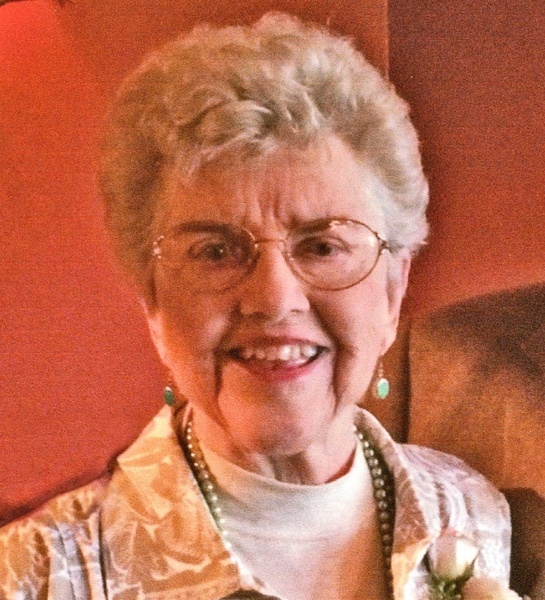 Age 90, Joanne Carran McGill of Lyndhurst, Ohio peacefully passed on Thursday, October 11, 2018.     She was born to William Mount and Laura Bell (nee, Froggett) Carran on August 18, 1928.  Her growing years took place during the Great Depression on Cottage Grove Avenue and Corydon Road in Cleveland Heights.  Joanne was a proud graduate of Cleveland Heights High School (1948) and Bowling Green State University (Bachelors of Education, 1952). On September 10, 1949, she married her high school sweetheart, Gerald Lee McGill, Sr.  They had just recently celebrated their 69th anniversary.  In the early years of their marriage she taught elementary school in the East Cleveland School District. Upon the birth of their first child she devoted her full attention to her family.

Joanne was a sister of the Alpha Delta Pi Sorority and a member of the Daughters of the American Revolution.  Her earliest Dutch ancestors arrived in New Amsterdam in the mid 1600’s. She proudly pointed to her families’ involvement in our country’s fight for Independence, the War of 1812 and the Civil War.  She was a direct descendent of S. P.  Mount (a Civil War veteran) who founded his Cleveland printing company in 1867. 151 years later the company is still owned and operated by S.P. Mount’s 5th generation descendants.

Joanne was an avid reader who enjoyed her book clubs and teaching youngsters to read through the Ohio Reads program.  Joanne had an engaging personality and a true passion for life.  She loved to joke about her “many friends on the Heights” but it was the truth; she had many lifelong friends and was sincerely saddened with each one’s passing.  Joanne enjoyed traveling, music, genealogy and challenged herself with lifelong interest in learning.  Pre computers and the internet she travelled to many locations to research her family tree.

She also had a passion for physical fitness and maintained herself with swimming and exercise classes.  She even had a personal trainer assisting her with conditioning into her 90th year of life!

Please attend our celebration of her wonderful life where together we may share our fond memories of Joanne. Coffee and pastries will be served at The Acacia Event Center, 26899 Cedar Rd, Lyndhurst, OH 44124, on Sunday, the 28th of October, 2018, 11:30 AM to 1:30 PM. At 1:30 PM we will conclude with a memorial service.  Her interment will be private. In lieu of flowers, the family suggests contributions be made to The Hospice of the Western Reserve, 17876 St. Clair Av​​enue,  Cleveland, Ohio 44110.