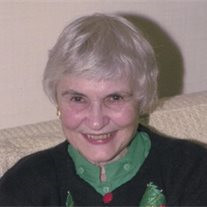 Joan Davis passed away peacefully November 28, 2015 at Anna Maria in Aurora. She was the beloved wife of the late Jeffrey Davis, loving mother of Jill Fanos (William) of Bainbridge and the late Jeffrey C. Davis; proud grandmother of Natalie and Michael Fanos, and longtime special companion of Richard Shaw of Aurora.

Joan was born January 19, 1930 in Akron, Ohio to Jack and Mildred Griffiths, and moved to Shaker Heights as a young girl with her brother, Bill. She graduated from Shaker Heights High School in 1948, and went on to complete a B.S. in Philosophy at Wellesley College in Boston. After returning to Cleveland, she received her Masters in Education from Case Western Reserve University.

In 1954, she married Jeffrey Davis, also from Shaker Heights. Before starting a family, Joan taught first grade in Cleveland Heights, and continued teaching as a reading and math tutor when her children were young. She continued her enjoyment of education by volunteering in school activities and local programs in Lyndhurst where they raised their family. She and Jeff later moved to Walden in Aurora and took full advantage of the beautiful setting, especially the walking trails.

Throughout their marriage, she and Jeff traveled to many destinations in the United States and to the islands of Tahiti, Hawaii and Bermuda where they enjoyed exploring and taking pictures of nature and the scenery.

Joan thoroughly enjoyed life. She was an avid reader, and loved spending time with her family and friends. She dealt with cancer at a young age and the heartbreak of losing her husband, and later her son, with amazing strength and dignity. She was known by her family and friends as a survivor, a tough little thing, and short but mighty.

Joan was blessed to share many happy times over the last 14 years with her companion, Richard Shaw. Music was an important part of their lives. They and their group of friends were regulars every Friday night at the Raintree Restaurant in Chagrin Falls listening to Buzz Cronquist and his band.

Joan was a devoted wife, mother, friend, and companion, and will be greatly missed.

A Memorial Service to celebrate the life of Joan will be held Saturday, January 16, 2016 at the Church in Aurora. Friends and family will be received at 10:00 a.m., service at 11:00 a.m. followed by a luncheon at noon.

The family prefers that those who wish may make contributions in her name to the WKHR Radio Station (91.5) 17425 Snyder Road, Chagrin Falls, Ohio 44023, or to The Church in Aurora, 146 South Chillicothe Road, Aurora, Ohio 44202, where the Memorial Service will be held.


PDF Printable Version
To order memorial trees or send flowers to the family in memory of Joan Davis, please visit our flower store.