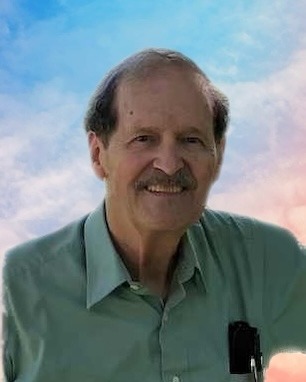 Jerry Adams Harpst was born 9/27/1938 in Glasgow, KY. He was the eldest of two sons of Harold Elroy Harpst and Lena Brown (Adams) Harpst. His father worked in the oil fields in southern Illinois, southern Ohio, Kentucky and Indiana. The family lived in several locations for his father’s work, and his mother taught elementary school in the towns where they lived. Growing up, Jerry often accompanied his father to the oil fields, and has enjoyed telling stories about that experience. He developed a love of the outdoors early, and he and his brother would hunt quail and squirrels in the fields and forests near their homes.

In high school in Princeton, Indiana he played the trumpet in the marching band, through which he ultimately met Bethalee June Brandenberger, a majorette for Central High School’s marching band in Evansville, IN. They eventually became engaged and then married in 1961 and would remain together until her death in 2008.

After high school, Jerry attended Wabash College and graduated in 1958. He then attended Yale University and obtained his Masters’ of Science in 1960 and his PhD in Physical Chemistry in 1962. He loved his experiences in college and graduate school and was dedicated to academic research for the remainder of his life. After marrying Bethalee in 1961, he went on to post doctorate at University of California, San Diego 1962-1964 and subsequently moved to Cleveland, OH as an Assistant Professor at CWRU 1965-1971. He became an Associate Professor in 1971-1999, and then Associate Professor, emeritus since 1999. From 1971-1972 the whole family moved to England where he was a visiting professor at National Institute Medical research near London. Later in his career, he was also a visiting professor from 1980-1981 at Oregon State University.

He and Bethalee have two daughters, Lisa Lynnelle Harpst (Cameron Tanner) and Tamara Lee Labhart (Sigmund Labhart III). The entire family went on many trips in a series of VW microbus campers, traveling the country in the summers, visiting National Parks, backpacking, and spending time with relatives. He was always happiest in the outdoors. Jerry loved fishing, especially fly fishing with friends and relatives and was a member of the Trout Club. He also was persuaded to take up turkey hunting, which he also greatly enjoyed.

He also enjoyed cultural activities: plays, orchestra and chamber music concerts, and church functions. He attended the Cleveland Men’s club, Trout Club, and enjoyed lectures through the university and the Museum of Natural History.

He is was preceded in death by both parents, his wife, Bethalee, his brother Harold Elroy Harpst, and nephew Mark Harold Harpst. He is survived by his daughters, his granddaughter Jacquelynn Sue Labhart, nephew Daniel Bristow (Cathy Bristow) nieces Debra Lucas and Sarah Harpst-Myers (Ernie Myers) and Cathy Harpst (Mark Harpst) and many great nieces and nephews. He will be fondly remembered by all of his family and friends with whom he has shared his life.

The family prefers that those who wish may make contributions in his name to St Jude’s Children’s Research Hospital (www.stjude.org) or to the Susan G. Komen Foundation (www.komen.org).

Send a Sympathy Card
In memory of Jerry Adams Harpst, Ph.D, please consider making a donation to one of the following charities: