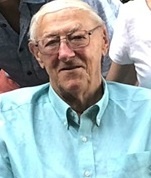 Returning to Cleveland in 1959, he began his real estate career with the A.B. Smythe Company selling houses. Soon thereafter, he and his brother Pete Smythe started Cragin, Lang, Free and Smythe, a commercial real estate brokerage firm. It eventually grew to become the second largest commercial real estate firm in Cleveland. He was the partner in charge of the firm’s property management business and was the Past President of the Cleveland Chapter of Building Owners and Management Association. (BOMA). He proudly was part of the group that helped save Playhouse Square from the wrecking ball in the 1970’s. He became a successful owner and syndicator of investment real estate including apartment, industrial and office buildings across Northeast Ohio.

He was best known as a consummate story teller with an outstanding repertoire of jokes for all occasions.  He especially enjoyed socializing, political banter, and family gatherings. He was an exceptional judge of people during the course of his life, and he was a friend to all who knew him. Prior to her death in 2010, he and his wife Becky enjoyed skiing in Sun Valley, Idaho and travelling the world, often joining friends on numerous sailing adventures. In later years he enjoyed companionship and travel with his close friend, Inger Mannerstrale of Stockholm, Sweden.

He was a member of the Kirtland Country Club, The Chagrin Valley Hunt Club, the Cleve-Edge Investment Club, and the Tavern Club. He was also an active supporter of University School, Williams College, the Playhouse Square Foundation, and the Cleveland Museum of Art.

In lieu of flowers a fund has been established at University School in his memory: https://give.evertrue.com/us/us-memorial-giving

A Celebration of Life will be scheduled at a later date.