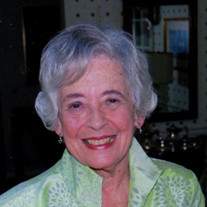 Jean A. Wiant, (nee Probeck) beloved wife of the late Richard A. Wiant, mother, grandmother, community volunteer and ardent supporter of music, died on October 16. She was 89 years old. She is survived by her children; Carolyn; James (Sharon); Marianne Shearer (John); Allen (Lisa) and her cherished grandchildren; James, Pence, Allison, Will, Lauren and Benjamin and her dear friend Carter Wang.

Family, community, and music defined Jean's life. From her first job out of college as a 'shut in' librarian, one that took her through the streets of Cleveland delivering books to the homebound, she found enormous satisfaction in helping others. She served on the board of Project Friendship, The Children's Guild, and Apollo's Fire. Jean led several initiatives to benefit Chagrin Falls Park and she was active on the Women's Committee of the Cleveland Institute of Music. An active member of the Church of the Western Reserve, Jean was also a long time member of InTown Club and The Mayfield Sand Ridge Club. She was a founding resident of South Franklin Circle.

Jean was also a lifelong student. She graduated from Laurel School and Sweet Briar College, and received her Master's degree in Special Education from Cleveland State University. Building on her experience as a special ed teacher, she opened her own business, One + One Associates, a tutoring center for students with learning disabilities that became a beacon for students near and far.

Jean lived a rich and full life. She enjoyed concerts, plays, lectures and books, and relished sharing good times with her wide circle of friends and family. Her spirit carried her through good times and hard times; her faith gave her strength and comfort. She lived her life with purpose and will be long remembered for the many ways she touched the lives of others.