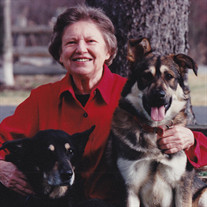 Jean graduated from Hathaway Brown School and received a degree from Colby Jr. College. In her youth, she was a research technician at University Hospitals. Following World War II, Jean enlisted in the Red Cross and was stationed in Germany to support the troops during occupation. Her volunteer work included the Society of the Blind, the Cleveland Museum of Natural History and delivering meals-on-wheels.

She received an honorary doctorate from the University of Akron in 2004, was a Life Trustee for the Cleveland Museum of Natural History and a former trustee of the Western Reserve Land Conservancy. A generous benefactor to multiple organizations, she received the Fieldstone Farm Grand Champions award and an award was created in her honor, the Jean Taber Compassionate Champion Award from Rescue Village in Geauga County. Additionally, she honored her family's history by her financial support of Hower House on the University of Akron campus.

In lieu of flowers, donations may be made in her name to the Hospice of the Western Reserve, 4670 Richmond Rd, Cleveland, OH 44128, Fieldstone Farm Therapeutic Riding Center, 16497 Snyder Rd, Chagrin Falls, OH 44023 or the Western Reserve Land Conservancy, 3850 Chagrin River Rd, Moreland Hills, OH 44022. Memorial services will be held at Wade Chapel at Lake View Cemetery on Tuesday, August 8, 2017 at 3 PM.
To order memorial trees or send flowers to the family in memory of Jean Taber, please visit our flower store.