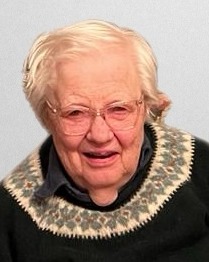 Jean Middleton James died of complications of Covid and the flu on December 20. A longtime resident of Iowa City, Iowa, for the past 12 years she resided with her daughter Catherine James LaCroix in Shaker Heights, Ohio, and subsequently in assisted living nearby in Beachwood Ohio.

Jean was born January 4, 1930, in Chicago, Illinois, where she grew up with her parents, her sister, and her beloved cocker spaniel, Topsy. She attended the Francis Parker School, where she met her future husband Sydney V. James, Jr. One of her fondest memories was of skipping school to watch the Chicago Cubs in the World Series in 1945. She lost a front tooth playing field hockey for the Parker school team, graduated early, and went to Carleton College (BA 1950) at age 16. Sydney and Jean were married in 1950, and were together until his death in 1993. At that time, Sydney was professor of American colonial history at the University of Iowa in Iowa City.

Jean was an independent spirit and a self-taught scholar of the Chinese language.  In 1964 she stopped wearing skirts because she realized she could, and was written up in the Eugene, Oregon local newspaper (where they then lived) as “She Smokes Cigars.”

She formalized her Chinese education at the University of Iowa when the family moved there in 1965, earning a Masters degree (Art History)  in 1978 and a Ph.D. in Chinese Art History in 1983.  Her dissertation was published as s A Guide to the Tomb and Shrine Art of the Han Dynasty 206 B.C.-A.D. 220 (Chinese Studies, V. 2).

She worked with Chinese authors in the Iowa International Writers Workshop as a translator, and translated the novels of Lao She, including Rickshaw and Ma and Son.  Her translation of Rickshaw is still used in college classes.

After Sydney died she traveled extensively; on September 11th, 2001, her family couldn’t reach her because she was in Romania. She also spent long summers at Sydney’s family summer home in Pentwater, Michigan, where she was a familiar sight walking the beach every day at 4:00.

She was a member of the College Art Association, the Association for Asian Studies, the Midwest Art History Society, and the Archaeological Institute of America (Iowa society treasurer, 1986-1997), where she helped to organize symposia on Chinese archaeological topics.

She was preceded in death by her parents, Robert Hunter Middleton and Katharine Reynolds Middleton, and her husband, Sydney V. James.  She is survived by her sister, Kathryn Middleton Chapin, and her children Samuel W. James (Susie) and Catherine James LaCroix (Kevin), as well as six grandchildren and four great-grandchildren.

There will be a private memorial event for family members in Pentwater in summer, 2023. Memorial contributions are requested for the Pentwater Township Library, PO Box 946, Pentwater, Michigan 49449. https://www.pentwaterlibrary.org