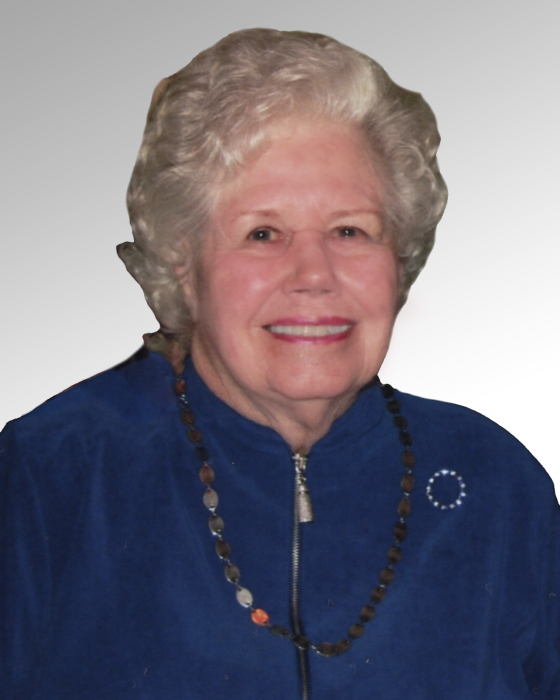 Jean Hackett Arnold, 98, a lifelong Clevelander and a resident of Judson Park since 2012, passed into Eternity on May 5, 2020 at Judson’s Health Center with her daughter, Judith F. Arnold of New Jersey, at her side. The cause of death was heart disease and complications of COVID-19.  Jean’s passing marked the end of a life lived vibrantly, energetically, and purposefully.  Hers was a life characterized by intense love and devotion to her husband Robert (Bob) Arnold for more than 78 years of marriage.  As it happened, Bob followed his wife in death only 5 days later (Mother’s Day) also with Coronavirus complications (see Robert Arnold’s obit for more about his community involvement and many accomplishments).  Jean served her two children – Judith, and son, R. Jeffery Arnold (deceased, 2014) – her family and friends, and her community with passion, vision, dedication, and a keen vision to the future.

Jean was a 2nd generation student to attend Laurel School in her high school years; the school had moved from the City of Cleveland location to a new, expanded campus in Shaker Heights in the previous decade with its new name.  Like her mother (Marjorie Lamprecht Hackett), Jean was an excellent student and graduated in the top level of her class in 1939.  Her classmates tagged her as “the woman most likely to succeed” going forward.  She then attended Bradford Junior College (top of her class) in Massachusetts and was accepted at Smith College the following year.  Meanwhile, her younger brother, George Hackett, had just entered Amherst College, also in Massachusetts.

Jean and her brother kept in touch, and George occasionally arranged a date for his sister.  It was serendipity that the date George set up in the fall of 1940 for Jean did not like football and Jean was anxious to go to the game.  So, George asked some other Fraternity brothers if someone might like to go to the game with Jean – and Senior Bob Arnold stepped up to be her date.

After that event and another follow-up date, Jean was reported as saying that she had met the man she hoped to marry.  Bob was preparing to graduate from Amherst and was looking into jobs to begin his career.  But he found time for Jean, and they became involved in a whirlwind romance which was complicated by the escalation of World War II.  Shortly after Bob Arnold’s graduation (Phi Beta Kappa) from Amherst in 1941, Bob met Jean’s family and proposed: the two were wed in January 1942.  Except for the War, the couple remained virtually inseparable for nearly 8 decades.  On April 12, 2020, Jean helped Bob celebrate his 100th birthday in person in their apartment and virtually with family.

Life with Bob was fast-paced and adventurous. After Bob was drafted and joined the US Army in 1942, Jean joined Bob at several Army training sites.  Following Officer Candidate School, Lt. Arnold was deployed to Africa in mid-1943 in the Infantry, then moved up through the European Theater to become a Major in General Eisenhower’s Intelligence Unit.  Meanwhile, Jean returned to her parents’ home in Cleveland Heights and gave birth to the couple’s first child, Judith F. Arnold on December 31, 1943 (the same birthday as Bob’s father!).  Jean’s parents helped to raise Judith during the first several years of her life.

Bob returned from the War in mid-1945, established their own home in Cleveland Heights, and the couple welcomed their second child, Robert Jeffery (“Jeff”) on November 1, 1946.  An immediate challenge confronted the young couple when their baby son was born with pneumonia. Understandably driven to try to save their son’s life, Jean and Bob bravely sought a cure: their tenacity led to Jeff being the first infant in the US to be treated with penicillin! Throughout her life, Jean remained a proud and loving wife, mother, sister and sister-in-law, aunt, great-aunt, grandmother, and great-grandmother.

Truly devoted to her beloved Bob, Jean readily supported her husband’s professional and numerous civic activities. She helped him and her father (and then her brother, George) build and grow what, for four decades, was one of Cleveland’s most prestigious and respected real estate firms, Hackett & Arnold.  She beamed with pride as Bob was sworn in as Mayor of Cleveland Heights, and was honored to serve as the town’s First Lady.

From her days at Laurel School to well into her 80s, Jean embraced a commitment to volunteerism – something she inherited from her mother and instilled in her daughter.  One of Jean’s favorite activities was helping with the Cache at The Church of the Covenant, her beloved childhood Church. She was also active with The Junior League of Greater Cleveland, both as a member and as a Sustainer. When Judith became a Girl Scout leader, Jean gamely volunteered to help chaperone a troop of teenage Cadet Scouts as they explored several Western National Parks and attended a local real-life rodeo! She was adventurous, fearless, and always ready to help when and where she could.  She volunteered for years with the area Diabetes Association, as well as numerous other nonprofit organizations.  She was also active with the PTA when both of her children attended the Roxboro Elementary and Junior High Schools.

She remained a loyal Laurel Alum and also contributed her time to her son’s alma mater, University School.  Jean was very instrumental with her children developing their writing skills early on – grammar, vocabulary, punctuation, and, for Jeff, pronunciation.  Her daughter, Judith, credits her mother as being one of her greatest mentors in giving her confidence in establishing her own business involved in marketing, writing, and branding for both large for-profit companies and nonprofits.  It was with great excitement and celebration that Jean and Bob were invited to attend the 2000 US Tennis Open in New York to sit in the President’s Box in the big Arthur Ashe Stadium to see top tennis and Judith receiving the first-ever US Tennis Association’s “National Media Excellence Award” for her Atlantic Racquet Press tennis magazine promoting grass-roots tennis, as well as the pros.

Jean and Bob were very focused on helping their children understand and develop values in life, including strong moral behavior, respect of everyone older and people of color, reflecting integrity in all aspects of life, and giving back to the community.  Those who have known them would say that their children’s behavior always reflected those life goals.

Jean shared Bob’s love of travel and enjoyed several cruises and overland trips with him. A highlight of their years together included a memorable around-the-world cruise with her brother and his wife.  She also enjoyed sports and was a passionate fan of the Indians, Browns, and Cavaliers, as well as the Harlem Globetrotters. Many evenings at home featured spirited – and highly competitive – games of Boggle, Pounce, or Scrabble.  Jean also enjoyed reading, crossword puzzles, and jigsaw puzzles. To her final days, Jean enjoyed wearing conservative but colorful clothing that complimented her sparkling blue eyes and made sure her blonde then white hair was well-groomed.

Sadly predeceased by her son Jeffery, brother George, and sister-in-law, Phyllis Bruce Hackett, as well as both of her parents, Jean leaves behind to honor her memory her daughter, Judith; Jeff’s widow, Susan Eastridge; Jeff’s first wife and mother of his children, Betsy Arnold Wheeler (Fred); two grandchildren Christine Arnold Fruehwirth (John) and Stephen Arnold (Farrah); five great-grandchildren, Ryan, Anna, and Logan Fruehwirth, and Liam and Sasha Arnold; nephew, Bruce Hackett (Judy) and their two daughters Emily Hackett Reaves (Mikey) and Rachel; niece, Carrie Hackett Gaul and her son, Jim; and her Cleveland cousins, Robert, Jan, and Liz Abbey (with her extraordinary therapy dog, Gracie, who continues to help so many others with health issues), plus others in the Abbey family.

She will also be missed by several of her daughter’s close friends of whom Jean was very fond and communicated frequently. They include Rita Strmensky, Claire Walton, and Judith’s Laurel ’62 alums Jeannie Brown Belhobek, Nancy Auwerter Cockley, and Pam Juergens Isquick (who was a saleswoman for Hackett & Arnold for awhile), among others.

Jean was cremated and her ashes rest with Bob’s in the Columbarium at the Church of the Covenant. A private memorial service for both Jean and Robert H. Arnold will be held at the Church in the future at the family’s convenience. Memorial gifts may be made to the Church of the Covenant (Covenant Cache Fund), 11205 Euclid Avenue, Cleveland OH 44106; or the United Way of Greater Cleveland, 1331 Euclid Avenue, Cleveland, OH 44115; or the Greater Cleveland Food Bank, 15500 S. Waterloo Rd., Cleveland OH 44110.

To order memorial trees or send flowers to the family in memory of Jean Arnold, please visit our flower store.