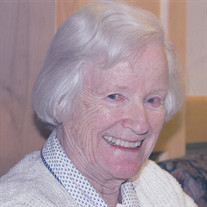 After graduation, she worked for the Plain Dealer before marrying Charles and raising five children in Shaker Heights. After Charles' death in 1989, Jane continued to live a full and active life.

Jane was a nature lover and ardent environmentalist, before the term was invented. She traveled widely, bird-watching and observing wildlife on trips to Africa, Costa Rica, Baja California, and Alaska. Before it was easy to accomplish, Jane also traveled to China, the Soviet Union, and Cuba.

She was interested in cultural exchange, and participated in five international exchange programs, hosting individuals from Europe and Asia.
Jane was an accomplished tennis player, and one of the first women to play squash in Cleveland. She was instrumental in bringing international tennis tournaments to Cleveland in the 60's and 70's, and counted many world champions as friends.

Jane was a naturally talented artist, designing and creating fine needlework that fills the homes of friends and family.

She was also a long term volunteer at The Cleveland Museum of Natural History, where she learned taxidermy and created exhibits that are still on display.

The family prefers that those who wish may make contributions in her name to Holden Arboretum, 9500 Sperry Road, Kirtland, OH 44094.

To order memorial trees or send flowers to the family in memory of Jane Kilroy, please visit our flower store.