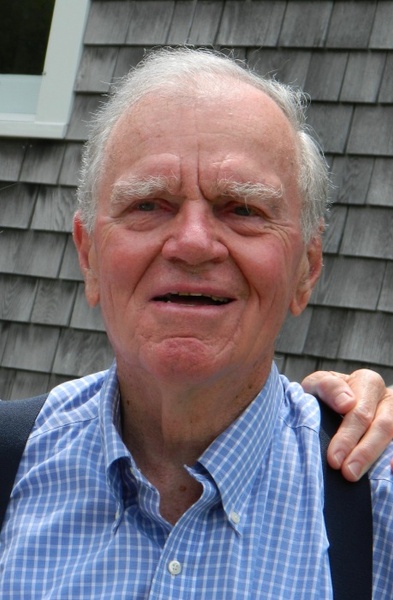 James Sims Reid, Jr. of Cleveland Heights, Ohio, died on May 13, 2020, at the age of 94, with Donna, his wife of 70 years, at his side.  James Sims Reid, Jr., known as Jim, was for many decades the Chairman and CEO of Standard Products Company, an international manufacturer of car parts headquartered in Cleveland and listed on the New York Stock Exchange. Born and bred in Cleveland, Jim and his wife, Donna Smith Reid, have been active in the city’s business and philanthropic circles for decades.

A lawyer by training, Jim was by instincts a businessman through and through. In 1987, Fortune Magazine called him “A Hero in the Rust Belt” in its issue profiling the “50 Most Fascinating Business People” of the year. He took a modest manufacturing company selling “low-tech, zero-sex-appeal” products to the American auto industry and transformed it into a global producer of highly engineered laminated extrusion products. By the 1990s, Standard Products was involved with almost every car on the road, its products appearing on more than 100 car, van and light truck models manufactured worldwide.  In 1998, its annual net sales exceeded $1 billion, with plants and partners in Latin America, Asia and Europe, but it still held its annual shareholders meeting at its longtime plant on West 110th Street in Cleveland. A year later, Standard Products was sold to Cooper Tire and Rubber Company.

Jim was a hero to many Cleveland arts and philanthropic organizations. He served on a number of boards, usually as Chairman. The Cleveland Orchestra was his great love. As well as being a member of the Board and Chairman of the Finance Committee for many years, he and his wife Donna had season tickets for Thursday evening performances for decades. Tom Morris, longtime Executive Director of the Cleveland Orchestra while Jim was a board member and Treasurer, writes that Jim understood even as he stewarded the Orchestra’s finances that “the finances were always in service to the art because of his abiding love of music.” He and Donna have also been longtime generous patrons of the Cleveland Museum of Art (where Donna is on the board and he was an honorary trustee). He chaired the board of John Carroll University (where he established a chair in Business honoring of his father) and also the Cuyahoga County Board of Developmental Disabilities. He has been a generous donor and active member of other community organizations, including the Tavern Club of Cleveland, the Kirtland Country Club and the Chagrin Valley Hunt Club, as well as Saint Paul’s Church in Cleveland Heights.

Jim was more than just a businessman and a leader: he was a scholar, a thinker and a world traveler. Born to James Sims Reid, Sr., and Felice Crowl Reid in 1926, he was the oldest of three siblings (brother George McKay Reid and sister Margaret Reid Mueller both predeceased Jim). He graduated from University School in Shaker Heights and went on to earn degrees from Harvard College (1948) and Harvard Law School (1951). He established Chairs in the English Department at Harvard College (honoring his mother, who had studied at Radcliffe) and in Business and Accounting at the Law School (reflecting his conviction that effective lawyers needed training in practical as well as constitutional issues).  He loved reading histories, the classics and, of course, William Shakespeare.  One of his favorite books, read multiple times, was James Joyce’s Ulysses, and as a matter of course, a trip to Dublin included a Joyce Walk.

Jim was also an outdoorsman.  From his earliest days roaming the countryside of Medina with his best friend (and, eventually, brother in law) Werner Mueller, he loved to hunt and fish. As an adult, Saturdays in hunting season he traipsed through fields and marshes with a succession of hunting dogs, and on Sunday afternoons in winter he tied flies in the family living room as he listened to opera. In later years, his fishing trips with friends and his nephews took him to remote streams in the American West.

Jim was indeed a hero to his family: his wife Donna, to whom he was married for 70 years; his daughters, Sally, Susan, Anne (who predeceased her father) and Jeanne, and their spouses and partners, John Sigel, Suzanne Ross, and Gregory Anrig; his eleven grandchildren; and two great grandchildren. He and Donna hosted many family occasions at the homes they built in Cleveland Heights and on Cape Cod.  Having traveled extensively over the course of their marriage, they also began hosting annual family trips to southern Africa with their most trusted guide and friend, Richard Coke.

Jim’s family wants to express their great appreciation for the staff, caregivers and nurses of Judson Park and Hospice of the Western Reserve, particularly Mona Arrington, who provided the very best of care in the final years of Jim’s life.

A formal celebration of Jim’s life will be held at a future date when family and friends can safely attend. In lieu of flowers, please consider making a donation to the Conductor’s Fund of the Cleveland Orchestra at: