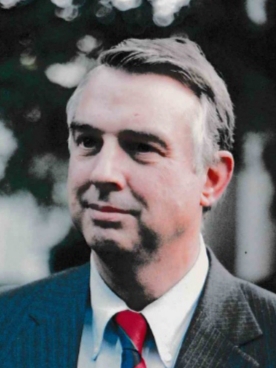 James Franklin Petznick (April 17, 1939 - March 27, 2020) of Shaker Heights was the son of Dr. George W. Petznick and Julia Jeanella Baughman Petznick. He was born at University Hospital in Cleveland and raised in Shaker Heights, graduating in 1957 from Shaker Heights High School. He pledged Sigma Nu at Duke University but graduated from Denison University as a Delta Upsilon in 1961.

He was an officer in the US Navy, eager to serve as a Naval Aviator in Pensacola, FL, but was Honorably Medically discharged soon thereafter. He married Roberta Morison Stone on Jan 30, 1965, and they set up home in Chagrin Falls. His career was in academic computing, first for the Case Institute of Technology and then for almost 34 years for Vanderbilt University in Nashville, TN, where he raised a son James Greydon Petznick and daughter Laura Ware Stone Petznick, both now of Shaker Heights.

He is a lifetime trustee of Sumner Academy in Gallatin, Tennessee, and was effective from its founding as a steadfast volunteer, serving on its PTA boards and as an early board president of that private elementary school. He loved fishing, trains, and collecting model trains, coins and British machin stamps. He and his wife enjoyed antique shopping and travelling together in the UK. With a wry wit, Jim was a man of few words. Kind and generous, his absence will be keenly felt by those who knew him.

Preceded in death by his wife of 53 years, whom he missed dearly these past sixteen months, he is survived by his children, niece and nephew, his brother George W. Petznick, Jr. of Huntsville, AL, Baughman family cousins, and many friends.

In lieu of flowers, donations may be made in his honor to the Hillcrest Cancer Center, 6780 Mayfield Rd., Mayfield Heights, OH 44124. The family will hold a graveside memorial service in Ashby, MA.

To order memorial trees or send flowers to the family in memory of James Petznick, please visit our flower store.