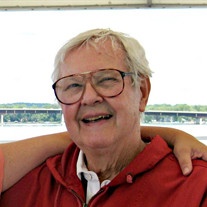 James Richard Nesper, 86, died on May 22, 2017, in Cleveland, Ohio. He was born on February 10, 1931, in Woodville, Ohio, beloved son of Erwin Ludwig Jacob Nesper and Alma Carolyn (Kruse) Nesper. His brother, Thomas E. Nesper, proceeded him in death.

Jim grew up in Marion, Ohio, spending one year of school at Mt Hermon High School in Massachusetts and graduating from Harding High School. He earned a bachelor's degree from Miami University and proudly served his country in the navy for four years during the Korean War. On September 9, 1961 he married his beloved wife, Elizabeth Shannahan, and they shared many happy years together raising their family, volunteering in their community, traveling and enjoying life.

Jim excelled as an investment broker at Paine Weber and at Roney Inc. He was a dedicated member of the Lander Circle Kiwanis Club and for seven years he supervised the yearly rummage sale, raising thousands of dollars for charity. He volunteered at Court Community Service and Meals on Wheels. He loved to whistle, sing, and travel.

Jim had a passion for history and geography. Intrigued by Stonehenge he wrote a murder mystery book that brings the mysteries of Stonehenge to life.

He is survived by his wife of 56 years, Libby, by his children Katherine, Carol (Bruce), and William (Vicki) and his grandchildren Abigail, Nicholas, and Zoltan.

Inurnment at Ohio Western Reserve Cemetery in Rittman, Ohio, with military honors, at a date to be determined.