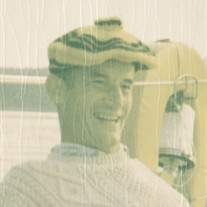 James Smith Marshall III, MD died at home in Gates Mills, OH on February 14, 2015. Born in 1925 to John and Marian Marshall of Bethlehem, PA , he was predeceased by his wife, Elizabeth and his sister, Nancy Marshall Forcier.

He graduated from St. Mark's School, Princeton University, and Columbia College of Physicians and Surgeons. He married Elizabeth Rockwell of Hartford, CT in June 1949. He served in the Marine Corps and was in general practice in Farmington, CT for 11 years, before joining University Hospitals in Cleveland, where he was a researcher in endocrinology and a faculty member at CWRU Medical School.

He was an avid sailor and treasured his summers on Penobscot Bay in Maine at the helm of his beloved sailboat, Whisper. Weekends in the duck marsh and on trout streams were favorite moments for him. He was a member of the Chagrin Valley Hunt Club, Winous Point Shooting Club, the Tavern Club, and Rolling Rock Club.

In lieu of flowers, those who wish may make donations in his name to Hospice of the Western Reserve ( www.hospicewr.org ) or the Cleveland Symphony Orchestra, 11001 Euclid Ave., Cleveland, OH 44106.