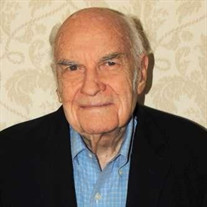 It is with great sadness that the loving family of Dr. James Spencer Hewlett announces his passing on February 15, 2018, at the age of 99. Dr. Hewlett was born in Winchester, Kentucky on November 30, 1918. At an early age, he moved with his family to Danville, Kentucky, where he was raised. He attended Danville High School and graduated from Centre College in Danville, in 1941. He received an M.D. degree from the University of Louisville School of Medicine in 1944 and completed an internship at the Methodist Hospital in Indianapolis, Indiana in 1945. He served a three year fellowship in Internal Medicine at the Cleveland Clinic Foundation in Cleveland, Ohio, which was followed by two years as a Research Assistant and Instructor in Internal Medicine (Hematology) at the University of Michigan Medical School in Ann Arbor, Michigan.

After a short time in private practice at the Lexington Clinic in Lexington, Kentucky, Dr. Hewlett returned to the Cleveland Clinic in 1953 as a member of the staff in Internal Medicine. When the Department of Hematology and Medical Oncology was later established, he became a member of that subspeciality. He served as Chairman of that Department from 1971 to 1979 and became an Emeritus Physician in 1984. From 1984 to 1991, he was Professor of Medicine at the University Hospitals of Cleveland, Case Western Reserve University. He became Emeritus Professor in 1991.

Dr. Hewlett is the author or co-author of 116 medical papers. In 2011, he was named one of "The 50 Best Cleveland Clinic Doctors. Ever.", an article written by Brandon Glenn of Med City News. At the Clinic he pioneered exchange transfusion for a blood disorder called thrombocytopenic purpura, a condition that had previously almost always been fatal.
Dr. Hewlett was a member of the Phi Delta Theta Fraternity and Phi Betta Kappa Society. He was a former member of the Shaker Heights Country Club in Shaker Heights, Ohio and the Wilderness Country Club of Naples, Florida.

Hewlett was predeceased by his wife, Martha "Skipper" Hewlett (nee Weir). He is survived by his two loving daughters, Catherine Bellman (David) of Kinnelon, NJ and Ms. Susie Moore of Washington D.C., four grandchildren: Christina, David, Andrew, and Peter; also survived by his first wife, Isabel R. Hewlett and his niece, Sallie Musser (Robert). A Celebration of Dr. James S. Hewlett's life will be held at the Serenity Chapel at the Laurel Lake Retirement Community in Hudson, Ohio, on Friday, June 1st at 11:30 AM. In lieu of flowers, memorial donations may be made to the Laurel Lake Foundation, 200 Laurel Lake Drive, Hudson, Ohio 44236. Interment, Lake View Cemetery.

To order memorial trees or send flowers to the family in memory of James Hewlett, please visit our flower store.