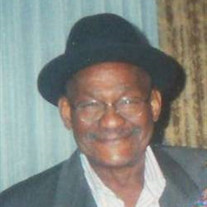 James Harris was born to Velma Prince and George Harris Sr. on March 15, 1929 in Brighton, Alabama. He grew up in Bessemer and spent his earlier years there. He moved to Cleveland, Ohio in 1948.

James met and married Kathleen (Harrington) Spencer in 1973. They joined together their children and created a beautiful blended family of six children. He was a hard working man, very spiritual and ever present in the lives of his family.

He was in the United States Army. He dutifully served his country during the Korean War and was discharged with honors. He transported medical supplies. He was a big brother to his fellow service men always looking out for them during the times of uncertainty.

He enjoyed bowling and bowled three (possibly more) 300 games. He was also an artist and enjoyed painting. He had a passion for golf. In his latter years, he was active in the church at First Presbyterian Church in East Cleveland. He painted all the signage and served as a Elder, was the grounds keeper and all maintenance in the building. He also helped with soup kitchen program that was ran by his wife for over a decade. He later joined Stow Presbyterian church.


PDF Printable Version
To order memorial trees or send flowers to the family in memory of James Harris, please visit our flower store.