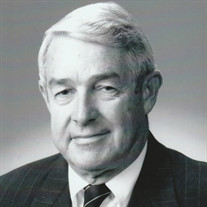 JAMES W. BROWN, Jr. passed on November 20, 2017 at the age of 84. Brown was a husband, father, grandfather, great grandfather, avid pilot, successful businessman and all-weather, carrier night landing qualified fighter pilot. Brown was born on February 11, 1933 in New Jersey. He graduated from Shaker Heights High School, attended Princeton University and graduated from M.I.T., a transfer done so he could marry his high school sweetheart, Constance Wright, who was his wife for nearly 65 years. In addition to a stint in the Navy, Brown enjoyed a successful business career, including tenure at Sohio and culminating in the business joy of his life: the ownership and leadership of Hartzell Propeller Inc., the world's leading and oldest airplane propeller company. In between, there was some dynamite.

Brown is the beloved father of six children, six in-laws, sixteen grandchildren, six grandchildren in-law and three great grandchildren. Each has been deeply influenced by his wisdom, intelligence, kindness, humor and sense of adventure. They continue to live by two of his favorite sayings: 1) Break A Rule Every Day; and 2) Heed the 11th Commandment: Thou Shalt Go For it. In addition to raising his family and having a successful business career, Brown mentored dozens of people who benefited from his constant encouragement and keen advice.

One of his most oft uttered sayings was "I am the luckiest man in the world." Today, his family mourns their loss, but count themselves the luckiest as they have always had his dedicated love, support and guidance.

A Memorial Service to celebrate his life will be held on December 16, 2017 at 4 pm at the Hunting Valley Campus of University School, 2785 SOM Center Road, Hunting Valley, OH 44022. The family prefers that those who wish may make donations in his name to the Cystic Fibrosis Foundation, 4550 Montgomery Ave., Suite 1100 N, Bethesda, MD 20814 or online at: www.cff.org or to an organization of their choice.

To order memorial trees or send flowers to the family in memory of James Brown,, please visit our flower store.