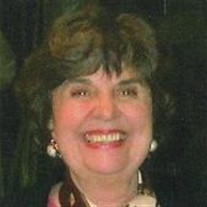 Huguette was born December 1, 1933 in Marseilles, France. Huguette attended Notre-Dame Des Oiseaux in Paris, Aryeh House Boarding School in Hove, England and attended The University of London. She moved to Cleveland, Ohio in 1955 to marry Thom Abel whom she had met in Paris. They lived in Brecksville, Ohio where they raised their two children. They had been married for 61 wonderful years.

Huguette was a retired French teacher and translator and touched the lives of everyone she encountered. Her life-long commitment to France and teaching enriched the lives of her students young and old. She was a past President of Le Cercles des Conferences Francaises, of which she was an active member for over 50 years, and remains an honorary board member. She was also active in The French Heritage Society and La Maison Francaise. Huguette was able to create and find a wonderful slice of Paris in Cleveland. She loved donating her time and talent to the Cleveland Opera, working with singers on performances of Faust, Romeo and Juliet, The Tales of Hoffmann and Carmen. She received her greatest joy spear-heading the French Montessori program in Cleveland and working with the young students.

Forever Parisian, she was proud to call Cleveland her home. She shared numerous trips to France with her family and cherished grandsons, creating lifelong memories for all. Her three grandsons were the center of her world and gave her unlimited joy and happiness. She will be remembered for her intelligence and kindness, her love of family, her loyalty to her friends, and her infectious smile.

The family would like to thank the entire staff at Kemper House in Highland Heights and Bella Care Hospice for their love and support. The caregivers, nurses and dining staff went above and beyond to give Huguette the respect and care she deserved.

A Memorial Service will be held on January 21st at 11am at St. Paul's Episcopal Church, 2747 Fairmount Boulevard Cleveland Heights., Ohio 44106. In lieu of flowers donations may be made to The Alzheimer's Association, PO Box 74924 Cleveland, OH 44194.

To order memorial trees or send flowers to the family in memory of Huguette Abel, please visit our flower store.