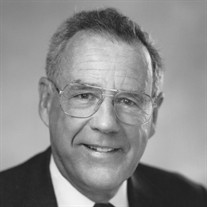 Howard's college years were interrupted by World War II. He joined the V-12 Naval Program which provided college students to obtain further education, which he did at Williams College, followed by office training. He spent most of the war in the Pacific on the USS Currituck, an amphibious plane tenderer. He reached the rank of Lieutenant Commander and Navigator.

In 1948, Howard married Cara Smith, daughter of Eleanor and Kelvin Smith of Cleveland, OH. He and Cara first settled in Yardley, PA where Howard worked for Roebling Steel Company as an Engineer. They subsequently moved to Cleveland in 1955 where Howard first worked for Preformed Line Products. In 1964 he was intimately involved with the founding of Aquarium Systems, Inc. where he served most recently as President until 1995 when he retired. Howard also was appointed president of the boards of trustees of the Aquarium of Niagara Falls and the Mystic Marinelife Aquarium several years after both transitioned to nonprofit organizations and were folded into the Sea Research Foundation, an offshoot company of Aquarium Systems.

In the early 1970's, Howard and Cara became owners of the R Lazy S Ranch in Jackson Hole, WY. They spent the next 40 years enjoying the social aspects of entertaining up to 45 guests four months every summer at their beloved ranch. Howard and Cara also enjoyed some winter months at their home in Sanibel Island, FL.

Howard had many hobbies, most significantly photography. He conducted one-man photography shows, often in concert with Cara's watercolor painting shows. Howard researched and wrote a comprehensive genealogy of his family, and completed an informative memoir of his World War II years. These documents are treasured by his surviving family.

Howard's most proud civic activity was serving as Life Trustee and former Board President of Hawken School. He is most recognized for Hawken's transition to coeducation in the mid-1970s. In recognition of both Howard's and Cara's unwavering personal and financial support of Hawken, the new 55,000 square foot high school education building in Gates Mills, OH was named in their honor. The opening ceremony for the recently completed Stirn Hall was on Saturday, August 20 and Howard and Cara enjoyed a private tour of Stirn Hall. Both were so thrilled and proud to have such a beautiful building named in their honor.

Howard's other civic activities included: Former Chairman, Board of Management of the Cleveland Aquarium; former Vice President, Board of Trustees of the Institute of Environmental Education; former Trustee and Chairman, Building & Grounds Committee of the Cleveland Society for the Blind; and Trustee of the Jackson Hole Conservation Alliance in Jackson, WY.

The family prefers that those who wish may make contributions in his name to Hawken School, P.O. Box 8002 (12465 County Line Rd.), Gates Mills, OH 44040 or to the Cleveland Museum of Natural History, 1 Wade Oval Drive University Circle, Cleveland, OH 44106.

To order memorial trees or send flowers to the family in memory of Howard Stirn, please visit our flower store.