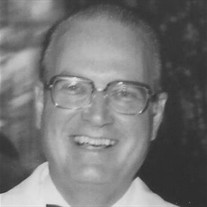 Herbert Ashley Gardner, known to his family and friends as Bud, died Thursday, September 1, 2016, in Hudson, Ohio at the age of 90. His loving wife of over 70 years, Gwendolyn (nee Morris), was by his side.

Bud was born October 13, 1925 in Cleveland, OH. He was a track star at James Ford Rhodes High School where he met his future wife, Gwen. He entered the Marine Corps during World War II and also attended Oberlin College and Northwestern University.

Afterward, he married and started to work for The Cleveland Twist Drill Co. which later became a part of The Acme Cleveland Corporation where he served as Vice President and COO prior to his retirement. He also served as President of both the U.S. Cutting Tool Institute and the Industrial Supply Association (ASMMA) and on the boards of several companies.

Bud's hobbies included golf, travel and flying. Over the years he owned and flew various types of small aircraft based out of Cuyahoga County Airport.

In addition to his wife, he is survived by his children, Herbert A. Gardner, Jr., known as Lee, and his wife Patsy (Watson) of Aurora, IL and Leslie Gardner Crossman and her husband Kim of Greensboro, NC, 3 married grandchildren and 2 great grandsons.

The family prefers that in lieu of flowers, contributions be made in his name to Crossroads Hospice, 3742 Boettler Oaks Dr., Suite F, Green, OH 44685.

To order memorial trees or send flowers to the family in memory of Herbert Gardner, please visit our flower store.