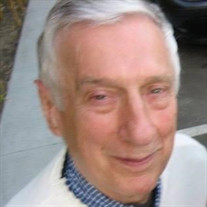 Henry S. Fisher (Harry) was a connoisseur of the finer things in life, good food, fine literature, classical music, smart clothes and exceptional people. Harry was an avid New York Times reader, honestly not missing any day for any reason. He was the ultimate renaissance man, pursuer of poetry and written works, teaching himself the Chinese game of Go, playing chess through the mail, insisting on using a hibachi to grill in the 1960's, catching Viennese string quartet performances while stationed in Salzburg during the Korean War. Harry pursued adventure. He had a lifelong love for bicycling, canoeing, and appreciating the outdoors. He took up rowing in his 60's winning many medals with the Western Reserve Rowing Association, painting watercolors and taking voice lessons in his 70's, as well as taking up yoga in his 80's. He was always interested in improving himself, whether that be taking classes in computer programing in the 1980's or learning about Buddhist ideology later in life.

Harry was never one to miss a good musical performance or a fine glass of wine. His good looks, intelligence and charm won him many friends and influenced people. Yet his short fuse and refusal to "suffer fools gladly" influenced others in a different way. Harry went out of his way to help people and was a champion of the underdog. He had deep empathy for others and spent much of his professional life in fields that changed people's lives for the better. He served as a Vice President for Cleveland Metropolitan Health Planning Corporation. During that time he created a comprehensive heath services plan for a five-county Cleveland area, which was quite a feat at that time.

Education was a cornerstone of Harry's life. He completed his undergraduate degree at NYU, and went on to complete two Masters degrees at Case Western University & the University of Michigan.

Harry was a loyal and loving father to his three daughters, Suzanne, Jennifer, & Rebecca, and a stellar grandfather to Alma and Lina. He was supportive to his children, embracing and encouraging their various paths in life. Harry spent much of his time with his partner of 39 years, Bonnie Baker. Bonnie & Harry spent many great years together traveling to Europe, Tobago, & across the country to visit Harry's kids, as well as spending many happy family times on Wellington Road. He and Bonnie enjoyed the arts together, attending operas, orchestras, and many art exhibits in Cleveland and New York City. Harry served on the board of the Cleveland Rowing Association and volunteered with M.U.S.I.C. and the Lyric Opera.

Harry proudly served in the Army in the Counter Intelligence Corps during the Korean War. He enjoyed being deployed in Salzburg, Austria.

He enjoyed his life and lived it fully, a lesson we can all take from him. He had a great sense of humor which was dry, witty, and in rare moments goofy, which can be evidenced in all the mugging he did when his picture was taken.

Harry was one of a kind, was deeply loved by us all and will be tremendously missed.

The family prefers that those who wish may make contributions in his name to Western Reserve Rowing Association, 1003 British St., Cleveland, OH 44113 or to M.U.S.i.C., 3939 Lander Rd., Chagrin Falls, OH 44022. Private family service. FRIENDS MAY CALL AT BROWN-FORWARD, 17022 CHAGRIN BLVD., SHAKER HTS., OH 44120 ON FRIDAY, NOVEMBER 11 FROM 5-7 PM.
To order memorial trees or send flowers to the family in memory of Henry Fisher, please visit our flower store.