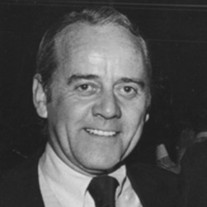 Henry G. Brownell, II, passed on peacefully  January 25, 2016 at the age of 92. Son of Anna (Manuel) and Brenton Brownell, 'Hank' is survived by his devoted wife, Patricia Brownell (Cooney); his three loving children Anne Brownell Ames (Richard), Brenton Grinnell Brownell, II (Kazuko), Henry Grinnell Brownell, III (Nicole), and six granddaughters, Elizabeth Pearce Ames, Camille Bredesen Ames, Anne Manuel Ames, Lucy Patricia Brownell, Samantha Logan Brownell, and Lauren Anne Brownell. His sister, Dorothea, and brother, Richard, preceded him in death.  Born and raised in Taunton, Mass., and later moving to Newport, R.I., Hank began his career working at his dad's dry goods store  N.H. Skinner. He entered Brown University where he graduated with a major in Mathematics and was a Member of Delta Kappa Epsilon Fraternity.  Hank proudly served in World War II as a First Gunnery Officer for the U.S. Navy in the South Pacific (Iwo Jima) aboard the U.S.S. J.D. Blackwood and attended The Ohio State University during his service for naval recognition.  Following active duty, Hank moved to Cleveland where he secured employment with The Higbee Company in 1946 sparking a career that spanned more than 3 decades. During his career, he spearheaded The Import Fair, The Daisy Sale, and The Twigbee Shop. As he advanced in his career he made many buying trips to Europe during the last days of ocean crossings. Hank maintained an infectious smile, gregarious laugh, and his classic wink.  Hank was a firm believer in executive presence. He would stand at the Higbee employee exit to offer each employee a handshake and bid them well as they departed the store each Friday evening. He was promoted to President in 1971 where he served faithfully until 1977. After retiring from Higbee's, Hank bought and ran Repair Services Management Company with 50 locations from Boston to Miami.  Hank was an avid swimmer, practiced golfer, and accomplished cook; his homemade oyster stew was an annual holiday favorite enjoyed with many cherished and longtime friends.  He loved the ocean and enjoyed competitive sailing in the Newport to Bermuda race, and family summer trips to Martha's Vineyard.  He was an amazing dancer, preferring big band, and had the ability to make people smile whenever he entered a room. Hank's signature color was purple and he exemplified impeccable style and taste.  He was the last of the world-travelled retail merchants.   He was a humbly devoted Member of Christ Episcopal Church, where he served in the Vestry and Ushered for 60 years. He served on many boards including Society National Bank, Tappan Corporation, and The Girl Scouts of America, and was also a distinguished member of The 50 Club, Associate Merchandizing Corporation, The Good Guys of Retail, and Cleveland State University.  Club affiliations where Hank enjoyed personal time with his closest friends and family include the Edgartown Yacht Club, The Union Club, The Cleveland Skating Club, The Country Club (past), and The Tavern Club (past).  Henry G. Brownell's life modeled honor, class, and dedicated service to his family, friends, faith, career, and country, and many will cherish his love for life; the last of "The Great Generation."   The family prefers that those who wish may make contributions in his name to The Cleveland Clinic Foundation, 2049 E. 100th St., Cleveland, OH 44195 or to The Kent State Fashion Museum, 515 Hilltop Dr., Kent, OH 44242. A Memorial Service will be held on Saturday, May 28th at 3:00 PM at Christ Episcopal Church, 3445 Warrensville Ctr. Rd., Shaker Hts., OH 44122.