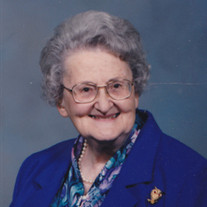 Hazel Traster Miller was born in Cleveland, Ohio to William and Zella Traster.
Hazel married Orville Edward Miller of North Canton, Ohio, on June 9, 1947, at Epworth Euclid Church, with the reception held at Wade Park Manor (now Judson Manor). They lived in Cleveland Heights where they attended the Church of the Saviour for many years. They had two daughters, Maxine and Roberta. Hazel had four grandchildren -- Jennifer, Christopher (Naomi), James, and Elizabeth -- and 2 great grandchildren - Eleanor and Elise.

Hazel attended Rozelle and Malvern Elementary Schools, Shaker Junior High, Shaker Heights High School, Ohio Wesleyan University, Western Reserve University and Dyke College. She worked as a secretary and a librarian. She became very active in genealogy and researched her family history finding connections to the ancestors who came to the United States from Germany in the late 1700s. Hazel became involved with family reunions of the Pontius, Ohl, Kreichbaum, and Auble families and met many, many distant cousins all over the country while attending yearly reunions. For years, she was the president of the Kreichbaum group. She served on the Board of Trustees and invested years doing research for the Pontius Family Association, even traveling to Germany three times with the Pontius cousins to visit relatives there.

Hazel was an optimistic person, a true friend, a life-long volunteer, a caring wife, a loving mother and grandmother, and an all-around wonderful person. In her later years, many knew her as the "smiley lady," because she was always there with a smile for everyone. She often said, "If I can't make someone smile, why am I here?"

An assignment for an eighth grade student from Ruffing Montessori School was to write a biography and she was paired with Hazel at Judson Manor. To quote this student, "Hazel says that her greatest achievement was having two kids. Someday she would like to be known for her smile since it seems to light everyone's day up when she enters the room. Hazel grew up as a shy girl, but now she cannot seem to get a smile off of her face."

During her life, Hazel was involved with many organizations. To name a few: she sang for many years in the choir at Church of the Saviour, was active in the Order of the Eastern Star, the Ohio Genealogical Society, The College Club of Cleveland, and United Methodist Women where she was involved with the Berea Children's Home (now OhioGuidestone). She delivered Meals on Wheels and participated with church visitations for shut-ins.

As a resident of Judson Manor for fourteen years, she volunteered in the library and served as floor chairperson for many years. She took up painting at age 80 and for ten years created scenic watercolors at Judson Manor. She also became active in the Judson Writing Group and wrote interesting stories about things from her past, such as when the banks closed, skinny dipping with her cousins, and sharing "SMILES" with her first grandchild, Eleanor.


In celebration of Hazel's life, let's all REMEMBER TO SMILE!!!


PDF Printable Version
To order memorial trees or send flowers to the family in memory of Hazel Miller, please visit our flower store.