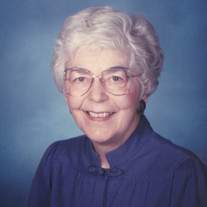 Except for a brief period during World War II, Hazel lived her entire life in Ohio. She was born in Kidron, raised in Orrville and graduated from Miami University. Following Joe's graduation in 1950 from the Dental School at The Ohio State University, the couple settled in Tiffin where they made their home and raised their family. Joe died in 1980, and Hazel moved to Chagrin Falls in 2002, where she died. Hazel was an inspiration to her family and her friends.

In her later years, she demonstrated remarkable courage and resilience, overcoming the effects of a stroke and other illnesses that limited her mobility. She continued to enjoy playing bridge with her friends. She was unafraid of technology and used a tablet computer for email, playing games and browsing the Internet, and she read books on her Kindle.

Hazel was an avid sports fan, following tennis and college basketball and rooting for the Cleveland Indians and the Ohio State Buckeyes. But nothing brought her more joy than to have her children, grandchildren and great-grandchildren around her.

The family suggests that remembrances of Hazel be made through donations to Trinity United Church of Christ (131 East Perry Street, Tiffin, Ohio 44883), Hospice of the Western Reserve (17876 St. Clair Ave., Cleveland. OH 44110) or the American Cancer Society.

A private memorial service will be scheduled at a future date.