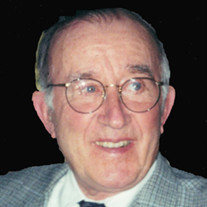 Harry Montgomery Freer of Lyndhurst, Ohio passed away on April 18, 2016 at the age of 90 surrounded by his wife and family.

Born in Canton, Ohio and raised in nearby Akron, Harry graduated from Western Reserve Academy then served in the U.S. Navy from 1944-1946 in the South Pacific. He attended The University of Pennsylvania Wharton School of Finance & Commerce and the Pan American School of Languages in Philadelphia.  He met his wife, Margaret Ann, at Christmastime in 1951 at the Portage Country Club.  Harry enjoyed a career in Cleveland at The Cleveland Press, Griswold Eschelman Co., and Carr Liggett, Inc.  He culminated his career as Vice President at Storycraft, Inc. Throughout Harry's career and into his retirement, he has been known and recognized for his superb writing and communication skills.

In his retirement, Harry volunteered for Esperanza's SISCO program where he tutored bilingual students in math and English. He was known for his keen belief in his students. In 2002, The Retired and Senior Volunteer Program of Greater Cleveland honored him with the Outstanding Quality Service Award. A stroke survivor and a one-time cover star for the Cleveland Clinic's Geriatric Times magazine, Harry was known for his quick wit, wisdom, and unending generosity. A beloved friend and treasured relative, he will be missed.


PDF Printable Version
To order memorial trees or send flowers to the family in memory of Harry Freer, please visit our flower store.