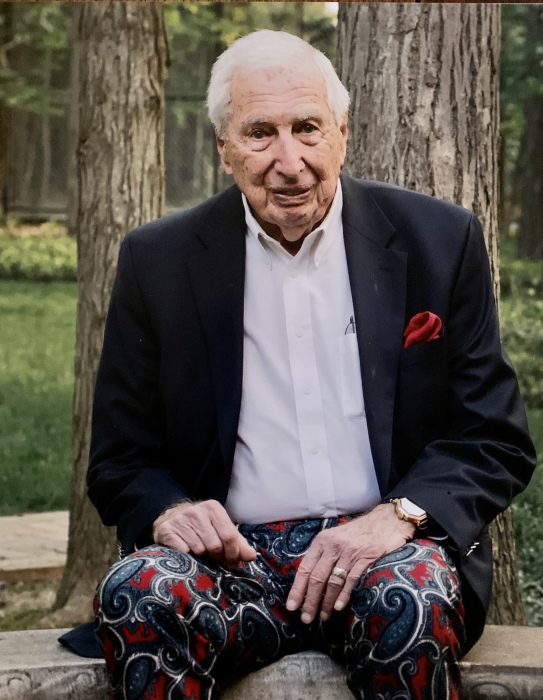 Having lived life to its fullest, Hal LaPine died peacefully on February 20 at the age of 94.

The only son of David and Naomi LaPine, Hal grew up in Cleveland Heights, attending Fairfax Elementary and Roxboro Junior High before graduating from Greenbrier Military School. He shipped out to the Philippines in 1945, and returned to spend one year at Ohio University before joining his father in the family parts shop. There, Hal honed his natural sales skills, and eventually built the business into LaPine Truck Sales & Equipment Company, the largest independent heavy-duty truck and trailer dealer in the United States. In 1985, Hal sold the company and began his second career as a real estate developer.

Gregarious, generous, and tenacious, Hal was perfectly suited for real estate, and it suited him. His phone and address book at the ready, Hal forged deals and relationships with scores of business partners who became lifelong friends, not just with him but with each other. Hal’s infectious optimism, humor, and joie de vivre endeared him to all, and he loved bringing people together. A true extrovert, Hal treasured any occasion to entertain his ever-expanding circle of friends and family.

Hal was deeply in love with Susan, his wife of 23 years, and was thrilled to be called “granddad” by nine wonderful grandchildren. In addition to his wife, Hal is survived by his daughter Kate LaPine, stepdaughter Kerry Kemp, from his first marriage to Joyce LaPine, and the seven “bonus” children that Susan brought to the family: Rich Marshall, Liz Marshall, Meg von der Heydt, and John, Olivia, Cliff, and Susan Marshall.

Competitive to his core, Hal was a natural athlete. He was a founding member of the Cleveland Racquet Club, excelled at squash, and played tennis through his 80s. He relished friendly competition in any arena –bocce court, dart board, or pool table – and never failed to have fun every day. Auctions were another source of great joy for Hal, and he filled his home with beautiful art and antiques, which he enjoyed as much for the good deal as for the aesthetics. He and Susan were enthusiastic supporters of Cleveland’s magnificent cultural offerings, with memberships and tickets to art, music, and theater. Hal traveled all over the world, but he loved to quote Sinatra: with his hundreds of dear friends and his deep roots in Cleveland, it was “oh so nice to come home.”

A celebration of his life will be held at the Cleveland Racquet Club on Saturday, February 26 from 5–8 p.m. In lieu of flowers, gifts may be made in Hal's honor to a charity or cause that does good in the world. To view the celebration of Hal's life virtually please click the link below.

To order memorial trees or send flowers to the family in memory of Hal LaPine, please visit our flower store.