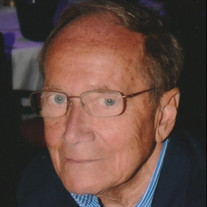 Glenn Howard Moore, 88, died August 28, 2017. He was born on February 12, 1929 in Pittsburgh, PA to the late Carl and Margaret (Spriggs) Moore.
A graduate of South Hills High School in 1946, Glenn joined the Army at age 17 and proudly served his country for two years in Korea before the outbreak of the Korean War.
In 1950, Glenn met the love of his life Jerry (Lee) Moore. They married in 1952 and enjoyed 65 years of happy marriage, raising two sons, Glenn Jr. and Craig.
Originally from Pittsburgh, Glenn started his business career in Cleveland, working for National City Bank. But with an outgoing personality, Glenn moved into sales roles, first with Calvert Distillery, followed by Wolfe Envelope and Boise Cascade Company. After a few years, Glenn had an opportunity to move into a sales management role for Boise Cascade and moved to Chicago in 1973, followed by a promotion to general manager and transfers to Pittsburgh in 1978 and Cleveland in 1980. Along the way, Glenn enjoyed the time he spent working with and getting to know countless employees, customers, and suppliers.
After retiring in 1998, Glenn started volunteering and delivered Meals on Wheels to seniors in Northeast Ohio. An avid traveler, Glenn and Jerry enjoyed traveling the world together, taking more than 30 tours and cruises and visiting each continent except for Antarctica. A devoted sports fan, Glenn never gave up on the Browns and enjoyed watching the Cavs and Indians. Glenn also loved catching an early afternoon matinee movie.
As a proud member of the ROMEO's (Retired Old Men Eating Out), Glenn enjoyed meeting his octogenarian buddies at local restaurants on Wednesday nights.
Glenn's main passion and source of joy was spending time with his family, especially his grandchildren Stephen-Michael, Sarah, and Daniel. Glenn showed up early and stayed late for countless dance recitals, volleyball games, baseball games, and hockey games. Glenn's eyes lit up when called "Papa" by his grand kids.
Glenn was a warm and welcoming person who invited everyone into his house - friends, family, friends of family and friends of friends, and treated them as family.

Glenn is survived by his wife, sons, and grandchildren; and he was preceded in death by his brother Carl Moore, and sisters Audrey McDaniel and Margaret Brown.

In lieu of flowers, the family prefers that those who wish may make contributions in his name to Meals on Wheels, c/o JFS, 24075 Commerce Park, Beachwood, OH 44122., or www.JFSA-Cleveland.org .