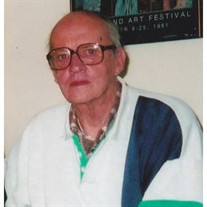 Glenn F. Julin was born on October 30th, 1928, in Pittsburgh, PA, to Ethel and Frank Julin both of whom were of Swedish descent. Ethel was trained as a teacher and Frank worked in the steel mills in McKeesport. Glenn had a brother, Donald, 7 years older.

In 1950, Glenn married Marguerite Casabona whom he had known since high school. Glenn served in the Korean War as a First Lieutenant in the Air Force, navigating 50 missions before returning home. After he completed his service, Glenn and Marguerite moved to Cleveland where Glenn managed Damon's Candies. His five children remember the wonderful aromas of the "Candy Kitchen," the chocolate waterfall, and Franz the Toymaker's visit to the candy store.

Glenn completed his undergraduate degree at John Carroll University and received his MBA at Case Western Reserve University. He worked for Sanford Rose employment agency for a number of years and also had his own employment business.

As the family photographer, Glenn chronicled family vacations of beaches, bridge playing, and historical tours, in Cape Cod and Williamsburg.

For many years, Glenn put a skating rink in the backyard and led thrilling lines of "crack the whip." He put speakers in the windows to serenade evening ice skaters.

Glenn was always interested in music and, though he had no formal training, he enjoyed listening to his family playing various small ensembles in his living room, occasionally joining in on the harmonica. His claim of perfect pitch was never independently verified. He built a Heathkit stereo set and installed speakers throughout the first floor of the house which he used to blast his children out of bed on the Fourth of July with Sousa marches.

Glenn and Marguerite were married for 64 years and lived in the same Cleveland Heights home for most of those years. In his quiet, reserved, way, he enjoyed the family gatherings at holidays and birthdays. Glenn and Marguerite (who passed away one year ago) were deeply loved by their children and ten grandchildren and will be missed.