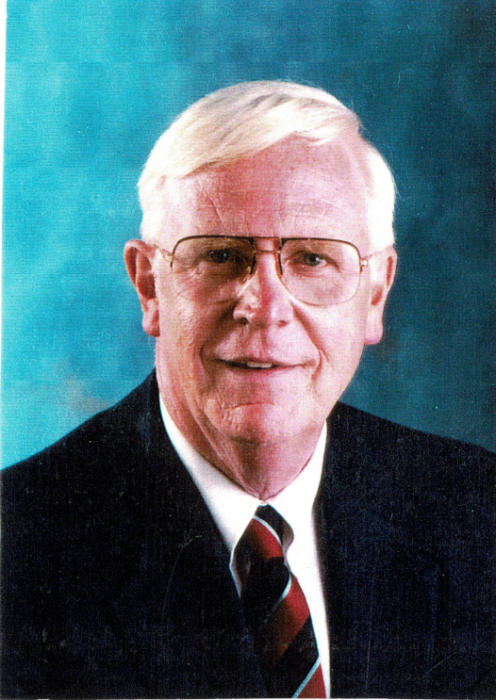 Glenn was an extraordinary man whose vision helped shape organizations as varied as The Standard Oil Company (SOHIO) to the offices of government and research to the many non-profits on whose Boards he served. He had a brilliant mind and photographic memory, coupled with huge empathy for his fellow man. He was born in Greensburg, Pennsylvania in humble beginnings, growing up in a home with six boys and no indoor plumbing.

As his 1948 high school yearbook noted when proclaiming this Class President as Most Likely to Succeed “Our tall senior president really has a bundle of brains inside that blond head of his. Glenn has made a name for himself as one of our star basketball players.” Not content to limit himself to one sport, while still in high school he was recruited by the Vandergrift Pioneers of the Middle Atlantic League, the farm team of the Philadelphia Phillies, pitching with a winning record against notables such as Whitey Ford, eventually turning down an offer from the Boston Red Sox. He chose instead to pursue higher education at Pennsylvania State University, graduating with a BS in Chemical Engineering.  In 1952 he married his college sweetheart Joanne Barnett, the mother of his two children, Robyn and Eric.

Shortly after graduation he joined the research division of the Standard Oil Co. (SOHIO)   and was quickly identified as a high potential employee, serving as Secretary of the Research Committee of the Board of Directors. Glenn’s interest in and knowledge of the petroleum industry was broadened by subsequent assignments in departments as varied as operations research, managing fuel cell programs, running the coal and uranium businesses, promoting chemicals, biotechnology and emerging materials  in R&D. While working full time he completed his MS from the Case Institute of Technology in 1954, followed by his PhD in Chemical Engineering in 1958.  He rose to the role of Senior Vice President, Technology and Planning and member of the Board of Directors.  His responsibilities included R&D, Engineering, Patent and Licensing, Strategic Planning, Alternate Energy and Health, Safety and Environment.

At Standard Oil Glenn promoted corporate policies which were far before their time involving individual performance goals, high standards, professionalism and diversity. One example is the high number of women and minorities that were employed under his watch. Management practices such as part-time work for women and corporate compensation for educational advancement were common.  He was always fair and inclusive.  SOHIO was widely recognized as a leading corporate citizen and good place to work under Glenn’s leadership.  He was noted for his walks through the research labs and corporate offices, taking time always to greet and chat with everyone he encountered. For his retirement party from SOHIO the theme was “My Way” by Frank Sinatra – he was respected and admired for sticking to his principles and always leading in his way.

Glenn took early retirement upon acquisition of The Standard Oil Company by British Petroleum in 1986. Retirement was not in his vocabulary, and he moved immediately to the academic realm as Director of Strategic Planning at Case Western Reserve University. He led the effort to merge the faculties of Case Institute of Technology and Western Reserve College; the Schools had been federated 20 years earlier but still retained separate alumni groups, athletics, and academic departments.  He became the first Dean of the Colleges of the combined faculties. He then became Vice Provost for Corporate Research and Technology Transfer working with industry and venture capitalists to exploit CWRU research findings.

After another failed attempt at retirement, he was nominated by the OHIO Business Roundtable to become the first formal Science and Technology Advisor to Governor George Voinovich in 1996. He stayed on in this role under Governor Bob Taft, writing the whitepaper “Competing on Knowledge” which became the justification of the establishment for the Third Frontier Program. He used the technology action funds as a catalyst for enhancing research activities across Ohio universities.

Glenn then went on to become President of the Generation Foundation whose mission was to fund and promote economic development projects that were collaborative and allied to Cleveland’s strategic plan.  Examples are BioEnterprise and the Opportunity Corridor.

No recounting of Glenn’s life would be complete without mentioning the 20+ non-profits on whose boards he served, including United Way, American Red Cross, Cleveland Clinic Innovations Advisory Board, Greater Cleveland Literacy Coalition, Cleveland Advanced Manufacturing Program, Industrial Advisory Board at MetroHealth, and the Campaign Committee for CWRU.

In addition to the corporate Board of The Standard Oil Company he was on the boards of Centran Bank, Society National Bank, Ferro Corp and Nordson Corp, lending his many talents to better our region.

He was SOHIO’s appointee to the Board of the Playhouse Square Foundation in 1980 when it appeared that the theatres were nearing demolition. Following their preservation and resurgence he became their Chairman of the Board, serving in that capacity for 5 years, calling the hiring of Art Falco as President and CEO one of his proudest accomplishments with the Board.  He received the President’s Award from Playhouse Square in 2013 and is  a life member of the Board.

He was a passionate fan of Penn State football and also loved playing golf.  He was a champion at table tennis and also at duplicate bridge .  He was a master at crossword puzzles and jigsaw puzzles, where he used his perpetually curious mind to complete any challenge laid in front of him with impressive speed. It’s worth noting that his crossword puzzles were always done in ink.  Glenn had impeccable penmanship with a very low tolerance for errors in spelling and punctuation.

In 1987  he married life-long friend and co-worker Jeanette Grasselli. Together they shared travels to over 100 countries, annual visits to the Cayman Islands, numerous rounds of golf and attended countless music, dance and theater events across the region. They were devoted to each other.

Glenn will be remembered for his support of public/private partnerships, as well as industrial/academic collaborations.

Throughout his professional career and personal life, Glenn served modestly but with intense desire to help others and to always strive for excellence. He was an exemplary and visionary leader and his efforts have made a significant impact across all areas of our community. He was a generous, kind, intelligent human being  – he will be truly missed.

To order memorial trees or send flowers to the family in memory of Glenn Brown, Jr., please visit our flower store.