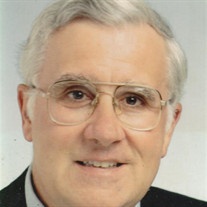 Gerry was a lifelong resident of Shaker Heights and graduated from Gilmour Academy class of 1959. He graduated from Kenyon College with B.A. in French in 1963 and received his MD from Western Reserve University School of Medicine Class of 1967.

From 1969 to 1971 he served as a surgeon in the US Army Medical Corps, including a tour in the Vietnam War.

He was the Head of the Division of Urology at University MEDNET until 2000, where he had been a surgeon in urology since 1974.

Dr. D was a board certified surgeon from 1976 and beloved for his tremendous bedside manner.

For numerous years he served as Assistant Clinical Professor at Case Western Reserve University School of Medicine. He retired in 2006 from the Cleveland Clinic Foundation Urological Institute, where he served in the Division of Urology since 2000.

When not practicing medicine Gerry loved woodworking, photography, playing tennis and golf. He spent countless hours playing jazz and classical music on his piano with his beloved black Labrador Retriever Monk at his side. He was an avid Cleveland sports fan and a season ticket holder for the Browns, Indians and Cavaliers.

He is survived by his wife Joellen K. DeOreo (nee Kramer), and his sons David H. DeOreo (Courtney) of Cleveland, Daniel J. DeOreo (Sara) of Manchester, MA and Matthew G. DeOreo (Sue) of Westport, CT, and grandchildren Wes, Emilie, Michael, Phoebe and Matthew DeOreo. He is the loving son of the late Dr. Gerard Anthony DeOreo Sr., MD and Virginia Butler DeOreo, and the beloved brother of the late Peter B. DeOreo, MD (Linda), Mary B. DeOreo (Marc Lackritz) and William B. DeOreo (Paula).

In lieu of flowers, those who wish may make contributions in his name to Case Western Reserve University School of Medicine, 2109 Adelbert Rd, Cleveland, OH 44106. A Funeral Mass will be held at 10am on Friday, December 23 at Church of St Dominic, 19000 Van Aken Blvd, Shaker Hts., OH 44122.