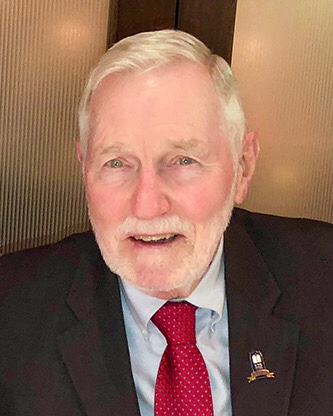 George J. Richardson age 83, a devoted husband, father, grandfather, brother, uncle, and friend passed away on October 13, 2021 in Newport Beach, CA while vacationing with family.  He was predeceased just four weeks ago by his beloved wife Mary Ann Richardson (nee Kelly) and previously by his sister Mary “K” Gorman, and his parents Loretta and Herbert J. Richardson.

He was a proud alumnus of Canisius High School in Buffalo, NY.  While attending St. Bonaventure University (class of 1960), he met and later married the love of his life, Mary Ann, with whom he recently celebrated their 60th wedding anniversary.  Together they built a beautiful life in Buffalo, NY and later in Shaker Heights, OH.

George served in the United States Army from 1960 to 1968 rising to the rank of Captain.  He started his career in systems and information technology in the early 1960’s, eventually joining Progressive Insurance in Cleveland and later Sherwin Williams, where he spent over 25 years before retiring in 2000. He shared his financial expertise by serving his community, including the Church of St. Dominic in Shaker Heights, the Thea Bowman Center in Cleveland, and his homeowners’ associations in both Shaker Heights and Naples, FL.

His commitment to his Jesuit education never wavered and during his retirement years he loved working at the Corbo Athletic Center at John Carroll University.  He was a devoted Blue Streak fan and being surrounded by the student athletes helped keep him young.  He was a long-time devoted member of both The Church of St. Dominic and St. John the Evangelist Catholic Church in Naples where he attended daily Mass with Mary Ann.

George loved the outdoors, spending many days exploring the US National Parks as a lifetime park passholder and visited Yosemite as recently as last weekend.  His favorite past times included walking and biking the streets of his beloved Shaker Heights and Naples.  He was an avid reader, a lifetime athlete, and an accomplished bridge player.

Family will receive friends at Brown-Forward Funeral Home, 17022 Chagrin Blvd., Shaker Heights on Thursday, October 28th from 5-7 PM.  Mass of Christian Burial will be held at Church of St. Dominic, 19000 Van Aken Boulevard, Shaker Heights on Friday, October 29th at 11 AM and where friends may call one hour prior to the service. Burial will immediately follow the Mass at Lake View Cemetery in Cleveland.  Funeral Mass can also be viewed through a live stream link on https://www.stdominicchurch.net/worship/livestream.  In lieu of flowers, the family prefers that those who wish may make donations in George’s name to The St. Dominic Endowment Fund.

To order memorial trees or send flowers to the family in memory of George Richardson, please visit our flower store.
Open