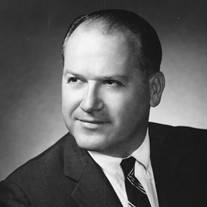 George was born in Muskogee, Oklahoma, where his father, George, was a minor league baseball player. The family moved to Royal Oak, Michigan, where he was raised, graduating high school at age 16. He moved to Cleveland to attend Western Reserve University graduating in 1939 as President of his Class, Captain of the Hockey Team, and a member of Who's Who of American Colleges. He attended Harvard Business School and returned to Cleveland to marry Martha Diamond, the homecoming queen from Western Reserve University. He then joined the Army in 1941 and served until 1945, where he rose to the level of 1st Lieutenant.

He received several recognitions for his business acumen, among those, Plain Dealer Business Man of the Year, Sales and Marketing Executives Man of the Year, Industrial Fastener Institute Soaring Eagle Award, and Honorary Doctorate of Laws degree from Tri-State University. But it was his love of Cleveland for which he was most proud.

He was the primary founder of the Greater Cleveland Growth Association, the Chairman of the Cleveland 500 Foundation, inducted into the Cleveland Sports Hall of Fame, and a Lifetime Trustee of both the University School and Case Western University. However, the pinnacle of his achievements for Cleveland were recognized when he was elected to the International Tennis Hall of Fame for having brought the Davis Cup Tournament to our city. Then having Mayor George Voinovich present him with a Key to the City of Cleveland acknowledging his efforts to bring financial stability to our city at a time of crisis.

He always managed to find time to be with his family and friends enjoying all activities including sailing, power boating, water skiing, tennis, and golf, where he and his sons were known for playing the fastest 18 hole rounds. He was a long time member of The Pepper Pike Club, The Union Club, and in Florida, the Everglades Club, and Hole-in-the-Wall Club.

The family would like to thank the entire staff at South Franklin Circle, especially the nurses, the caregivers, and the dining room crew, for their love and attention to him over the past several years and for giving him an opportunity to show many more people his infectious smile. Just as Pops would have wanted it, his family was at his bedside in his final moments reflecting on his wonderful life.

There will be a gathering at South Franklin Circle, 16575 South Franklin Street, Chagrin Falls (valet parking will be available) on January 13, 2017 from 3-5 PM to celebrate George's life. The family will say a few words at 3:15 PM and a reception will follow.
To order memorial trees or send flowers to the family in memory of George Grabner, please visit our flower store.