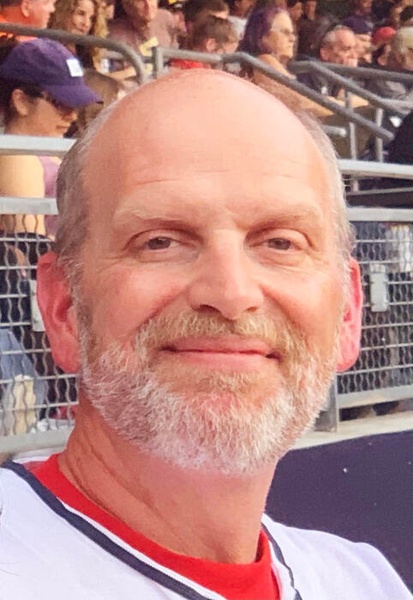 Gavin Tracy Smith “The Gav” of Cleveland Heights, Ohio, passed the surly bonds of this earth at the too-early age of 53 on December 29, 2020. He was born in Toledo, Ohio, on June 24, 1967, to Linda Corcoran Smith and Arthur Harold Smith and grew up with three loving brothers in Maumee, Ohio. As a child, it was readily apparent Gavin had so many gifts and talents that he freely shared, making friends, telling jokes (as noted by his Kindergarten teacher), picking on his youngest brother, and honing the quickest wit under the tutelage of his two older brothers. In high school, Gavin’s many (many) friends would refer to his childhood home as “Gav’s Bar & Grill” and the phone was answered as such since most calls were for him.

Gavin met his wife, Catherine Wynne Carter, in 1983 as Group Leaders at an Episcopal Diocese of Ohio event. They married October 21, 2000 and went on to have a son, Arthur Joseph Garcia “A.J.” Smith on August 18, 2008. Complementing Gavin’s entrepreneurial spirit, he co-founded and owned and operated, with his best friend Andrew Craze, Western Reserve Brewing in 1997. As craft beer pioneers, they happily served Western Reserve to adoring fans throughout Cleveland and beyond. He enjoyed this venture with Andy, who preceded Gavin in Death in 2016.  We’re pretty sure Andy was at St. Peter’s gate for Gav’s arrival, holding a sign that read, “You Deserve a Reserve!”.

In addition to being a dedicated and loving father, Gavin also loved all sports (Go Blue! Tribe! Cavs, Browns), the Grateful Dead, craft beer, good souls, and great stories – some even true! Throughout his entire life, Gav held an unwavering faith in God, which he shared with those who surrounded him, and he immensely enjoyed working with youth in ministry with whom he was very influential.

Gavin is preceded in death by his stepfather, Arthur Hawthorne Criddle, December 15, 2020. He is survived by wife, Catherine Wynn Carter and son A.J. Smith. He is also survived by his parents, Rev. Dr. Linda Smith-Criddle, Arthur Harold Smith, stepmother Connie Sue Barron; The Smith brothers Geoffrey Tate (Joan), Drew Corcoran (Barbara), and Dustin Ford (Jen), and stepsister Jennifer Shannon Mack.  Additionally, he left behind numerous beloved aunts and uncles, nephews, and nieces, and cousins. All of his mourning family and friends all appreciated his ability to love and be loved. His entrance to heaven will be loud and with great fanfare, not quiet or reserved.

Goin’ home, goin’ home, by the waterside I will rest my bones

Listen to the river sing sweet songs, to rock my soul    -Grateful Dead

There will be a memorial service in Cleveland and virtually at a later date. If you are interested in donating to Funds for A.J. please contact: ajsmithfund@gmail.com.