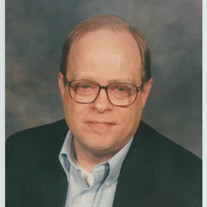 Frederick Stark Bellamy, born November 24, 1947 to John Stark and Molly
Doan Bellamy, died November 30, six days after his 70th birthday. A
lifelong resident of Cleveland Fred attended Shaker Heights schools and
graduated from Howe Military Academy in Howe, Indiana. In spite of
being stricken with mental illness in his late teens Fred lived a full
life. He worked at the Cleveland Plain Dealer for 27 years, continuing
a long family legacy begun by his grandfather Paul Bellamy who was the
Editor of the Plain Dealer for 25 years, his uncle Peter Bellamy who was
the longtime Drama Critic and his mother, Molly Bellamy who was the
Society Editor for many years. After retiring, Fred volunteered for
Meals on Wheels, joined a bowling league and volunteered weekly at his
church, Christ Episcopal Church in Shaker Heights.

He is predeceased by his parents, sister Constance Bellamy Berkey and
special friend Patricia McIlraith. He is survived by his sister Susan
Brewer and husband Jay of New Braunfels, TX; his beloved aunt Joan
Bellamy May of Haverford, PA ; nieces and nephews Nancy Jones (Bond)
and four children of Austin, TX; Katherine Battenberg (Will Mahoney) and
daughter Abigail of Tulsa, OK; James Berkey (Betsy) and two children of
Havertown, PA; Christian Berkey and three children of West Lebanon, NH;
Rachael Berkey of Brooklyn, NY; brother-in-law Charles Berkey of
Chagrin Falls,OH and numerous cousins near and far.

The family would like to thank the staff of Diplomat Healthcare where
Fred lived for the last 4 years, for their loving care, especially Julie
Vassel. And his cousin Josie Woods of Aurora,OH whose love and support
made all the difference.

The family prefers that those who wish may make contributions in his name to Christ Episcopal Church, 3445 Warrensville Ctr. Rd., Shaker Hts., OH 44122 where a Memorial Service will be held on Saturday, January 13, 2018 at 2 PM.