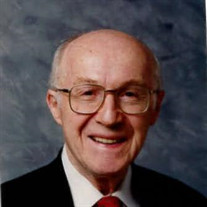 Dr. Owens was born in Kalida, Ohio in 1921. He was Mayor for a Day (Youngstown, Ohio), a member of the American Legion Buckeye Boys State of Ohio, and an Eagle Boy Scout during his youth. He graduated from East High School, Youngstown, Ohio in 1938, and from Ohio State University (B.A., summa cum laude with distinction) in 1941. He married Lois Arlene Parrish in 1944. Dr. Owens began his career in medicine at Ohio State University College of Medicine earning a medical degree in 1944. He interned at Ancker Hospital (St. Paul) and did his residency in internal medicine and gastroenterology at Henry Ford Hospital (Detroit). He was in the United States Army (Lieutenant) from 1944 to 1948. He joined the Cleveland Clinic Foundation in 1954, spending the rest of his career at CCF until his retirement in 1987. He remained active as an emeritus staff doctor. He was a Fellow in the American College of Physicians and a member of the American Board of Internal Medicine (Internal Medicine and Gastroenterology). His academic appointments included Wayne State University, University of Chicago, CCF and Case Western Reserve University.

Dr. Owens was active at Plymouth Church serving as an usher and deacon for many years. Dr. Owens was a man of science but also a lover of great literature and poetry, which he studied and shared with eloquence, and sometimes humor, until his death. Travel, music, sport and games, including ballroom dancing, were interests he pursued with joy with his beloved wife, children and grandchildren. He will be remembered by them as a loving man who lived a good and complete life.

The family prefers that those who wish may make contributions in his name to Taussig Cancer Institute, Cleveland Clinic Foundation, 9500 Euclid Avenue, Cleveland, OH 44195, or to Plymouth Church, 2860 Coventry Road, Shaker Heights, OH 44120 where Funeral Services will be held on Saturday, December 10 at 11:00 a.m. followed by a reception in the church parlor.
To order memorial trees or send flowers to the family in memory of Francis Owens, please visit our flower store.