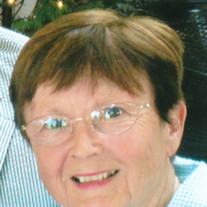 Frances W. "Fran" Metzger (nee Wilcox) of Shaker Heights passed away Thursday, June 25, 2015 at age 77, with her loving family by her side. She was the beloved wife of Robert L. "Bob" Metzger for 55 years; dear mother of Richard, LeeAnne and Susan Kownacki (Frank), and grandmother "Mama" of Cecilia. She is preceded in death by her sisters, Sally Templin and Susan Kamrath (Bus), and her sister-in-law, Lyn LaPorte (Tom).

Fran was financial secretary for Christ Episcopal Church and St. Paul's Episcopal Church. When her daughters were young, she was very involved in their figure skating, including as President of the Shaker Figure Skating Club. She was a skilled seamstress, making skating dresses for her daughters and other skaters, as well as being accomplished in cross stitch and other forms of needle work, creating several large works of art. She was a member of the DAR, and a volunteer at Meals on Wheels, the Hospice of the Western Reserve, and several groups at St. Paul's Church. She will be deeply missed by her family, friends and cats, Lucy and Abby.

In lieu of flowers, the family prefers that those who wish make contributions in her name to Hospice of the Western Reserve, 300 E. 185th St., Cleveland, OH 44119 or to St. Paul's Episcopal Church, 2747 Fairmount Blvd., Cleveland Hts., OH 44106 where a Funeral Service to celebrate Fran's life will be held on Wednesday, July 1st at 3 PM.


PDF Printable Version
To order memorial trees or send flowers to the family in memory of Frances Metzger, please visit our flower store.