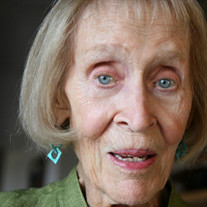 Florence, known as "Flea", her nickname since her grade school days, was born on November 22nd, 1920 to Alexander Cushing Brown and Mary Bristol Dana Brown in Cleveland, Ohio. She was the first born of paternal twins. She completed grades 1 through 12 at the Hathaway Brown School for girls in Cleveland and spent many happy summers in her youth on the family farm in North Bloomfield, Ohio.

Florence possessed a life-long appetite for adventure and new experience and a passionate devotion to her family and for helping others. These traits can be traced back in her family tree. According to published historical accounts, her ancestors were explorers and early settlers of Ohio's Western Reserve and were well known and respected in their day for their belief in and for devotion to one another and for their commitment to 'public concerns' and specifically against tyranny and injustice. Florence's Great, Great Grandfather Ephraim Brown, founded Brownwood, now North Bloomfield, Ohio. Her Grandfather Alexander Ephraim Brown invented the Brown Steel Hoist that revolutionized the lake shipping industry. He and his father, Fayette Brown, founded the Brown Hoisting & Conveying Machinery Co. in 1880. Alexander Ephraim's steel hoist was patented and distributed all over the world. Great, Great Grandfather Ephraim Brown was adamantly opposed to slavery and harbored fugitive slaves attempting to escape to Canada via the Underground Railroad. Florence was proud of her family's history and sought her whole life to emulate their example.

After high school Florence attended the Erskine School in Boston where her studies were focused on theatrical arts. She went on to do summer stock at North Shore Players in Marblehead, Mass. Florence's pursuit of theatre arts was deflected due to WW II and she spent those years in Washington, D.C. working in the War Department for Military Intelligence. She moved to New York City in the late 40's where she worked for the production company, Theatre, Inc. and for Master Set Designer Jo Mielziner. It was while Florence was living in NYC that she met Allen Field Schauffler. Florence (Flea) and Allen (Al) fell in love and married in 1949. They celebrated their nuptials with a 70-mile hike between Mt. Hood and Mt. St. Helens in Washington State. This would be the first of many wilderness adventures that they as a couple and as a family would share.

Al and Flea began married life in John Day, Oregon where they worked a ranch owned by Al's family. This rural life and working with farm animals prompted Al to become a veterinary student. In the early 50s the young couple lived in Pullman, Washington while Al attended Vet School at WSU. Flea worked as a secretary. Jennifer and Dana were born during those vet school years. After graduation and a cross country trip in search of a place to start a veterinary practice Al and Flea settled in Cottonwood, Arizona, situated in the 'heart' of that state's picturesque Verde Valley. It was there that they opened a veterinary practice and raised their family.

Flea, who found great pleasure and fulfillment in giving back, helped found the Verde Valley's first mental health clinic and was a board member. She also dedicated her time to helping battered women get a new start. She and Al mentored numerous young people, opening their hearts and home to them. Some of these relationships have endured to this day. Flea was an accomplished horsewoman. She and Al explored much of the Verde Valley on horseback with their family.

Al and Flea parted ways in 1978 but remained friends. Flea moved to Scottsdale, AZ and decided to take courses in theatre arts at a local community college. She later moved to L.A. where she went on to have a successful career as a character actress on the stage, in film and television for 15 years. (suggestion: Google Florence Schauffler, her accomplishments there are impressive, given her late return to her craft.)

At age 75, Florence returned to the Verde Valley and lived with her daughter and son-in-law in Clarkdale. She was a loving grandmother and a devoted volunteer for local charitable organizations. It gave Florence particular joy when the opportunity arose during her retirement years to 'dust off her craft' and lend her talents to local creative projects.

Florence's humanity, her gracious and generous spirit, her humor and belief in "a purpose greater than one's self" did not fade and continued to inspire all who knew her until the day she passed.

Flea, those of us who knew and loved you have been blessed to have shared this life's journey with you. We will remember you for many things, but we will remember you best for the love you shared with us and with so many - love given with your whole heart and without condition.

An intimate graveside service will be held for Florence in May at Lake View Cemetery in Cleveland, Ohio. Arrangements by Brown-Forward Funeral Service.

Donations in Florence's memory may be made to any of the following organizations with the deepest gratitude of her family: Hathaway Brown School, 19600 North Park Boulevard, Shaker Heights, Ohio, 44122; The Lake View Cemetery Foundation, 12316 Euclid Avenue, Cleveland, Ohio 44106; St. Hubert's Episcopal Church, 8870 Baldwin Road, Kirtland Hills, OH 44060; or a charitable organization of your choice.

To order memorial trees or send flowers to the family in memory of Florence Schauffler, please visit our flower store.