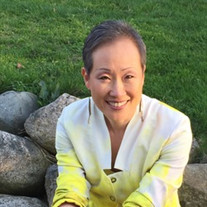 Erica (Eunhi Choi) Weiss was born December 27, 1959 in Seoul, South Korea to loving parents, the late Dong Hie Choi and Joo Young Choi. Erica immigrated to the United States in 1975 at the age of 15. The family settled in North Canton, Ohio where her parents owned and operated a martial arts studio with the assistance of Erica and her brother, Michael. Erica graduated from Glen Oak High School in 1978 and became a naturalized citizen in 1980. Erica attended the University of Akron where she graduated with a Bachelor of Fine Arts degree with a major in Graphic Design in 1982. After graduation, Erica began a career in the retail industry designing and installing department store display windows, first at Marshall Fields in Chicago and later at Higbee's in Cleveland.

In 1986, Erica was introduced to David Weiss by childhood friends of David after he returned to Cleveland upon completing law school. The two dated and were married at Fairmount Presbyterian Church in Cleveland Heights in 1989. Erica's career continued to evolve as she moved into the Human Resources field, initially in the retail industry and later in the health care sector, working for Higbee's, University Hospitals of Cleveland and the MetroHealth System in Cleveland. During this period, Erica gave birth to her son, Justin, in 1992 and her daughter, Marguerite, in 1997.

In 1998, Erica was diagnosed with breast cancer with a recurrence of the cancer in 2000. Erica was very open and honest about her condition with family and friends with the hope of increasing breast cancer awareness. She became active with The Gathering Place, a nonprofit organization providing services to families touched by cancer. She also established deep and meaningful bonds with others impacted by breast cancer.

After recovering from her treatments, Erica devoted her time and efforts to her love of art, particularly modern art and mixed-media painting. Erica began exhibiting her works in local art shows and outdoor art festivals and later at a "pop up" temporary retail location in Cleveland's Shaker Square district. She eventually opened and operated a permanent art gallery and retail location in the "Little Italy" neighborhood of Cleveland for over twelve years under the name "Juma" based upon the combination of the first two letters of her children's names. In 2012, Erica opened Juma in Shaker Heights. Her second store expanded her retail concept with a wide array of art, glass, ceramics, jewelry, and gifts, adjacent to a clothing boutique and adjoining coffeehouse.

Over the years, Erica gained an increased following for her paintings and other artwork. In addition to her paintings, she particularly enjoyed designing and producing jewelry, encaustic works and handmade paper. She was constantly growing and challenging herself, studying painting and other media at the Penland School of Crafts in North Carolina and the Haystack Mountain School of Crafts in Maine along with the Morgan Conservatory in Cleveland. She painted and sold over 300 pieces including large scale installations at the Cuyahoga County Ohio Administration Building, the law offices of Tucker Ellis and Southwest General Health Center.

In addition to her professional life, Erica was a devoted mother to Justin and Marguerite, enjoyed spending time with her mother Joo Young, brother Michael, sister-in-law Alicia and nephews Stephen and Miguel, and sisters-in-law Katharine Kenny and her husband Philip, Rebecca and nephews Jordan and Christopher, and Virginia and her husband Stephen Sedam. She also enjoyed music and reading, and travel with her husband David. In addition, Erica loved visiting with her wide range of friends and colleagues. She felt a particular affinity to the communities in which she worked and lived.

Erica will be profoundly missed by her family, friends, customers and community.
The family prefers that those who wish may make contributions in her name to The Erica E. Weiss Memorial Scholarship Fund, c/o The Cleveland Institute of Art, 11610 Euclid Ave., Cleveland, OH 44102. (cia.edu) Memorial Services will be held Saturday, June 11th at 11 AM in Fairmount Presbyterian Church, 2757 Fairmount Blvd., Cleveland Hts., OH 44118. FRIENDS MAY CALL AT THE RESIDENCE, 18102 PARKLAND DR., SHAKER HTS., OH 44122, WEDNESDAY, JUNE 8TH AND THURSDAY, JUNE 9TH FROM 5-7PM.