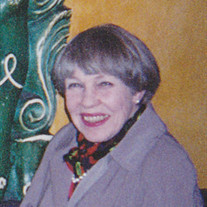 Elizabeth Carroll Shearer, 89, of Chesterland, Ohio died at 7:30 am on Friday, December 5, 2014. She was born December 27, 1924 in Garrett, Indiana to George Charles Carroll and Margaret M Mountz Carroll.

She was a graduate of Wiley High School in the class of 1942. She received her bachelor's degree in French from Swarthmore College in 1946. In 1947 she married Robert Lundie Shearer of Edinburgh, Scotland. Robert was a major in the British Army in World War II and was one of those rescued by the evacuation of Dunkirk. After their marriage, Elizabeth and Robert traveled throughout Europe while Robert was on assignment with the British Broadcasting Company. They returned to Edinburgh where they lived before moving back to the United States. They settled in the Cleveland area where Robert worked as an engineer.

Elizabeth was preceded in death by her husband in 1987 and by her parents. She is survived by her sister, Mary Ann Carroll.

The Cleveland area was an ideal location for Elizabeth to spend most of her adult life. The outstanding cultural and educational resources available fit her interest and talents perfectly. She was devoted to and extremely active in the Print Club of Cleveland. She served many years as a Trustee, was President of the Club and during her later years was the Club's Historian, She was an officer of the Women's Council of the Cleveland Museum of Art, a member of the Town and Country Garden Club, a longtime volunteer in the library of the Western Reserve Historical Society, and in that capacity helped many people with their genealogical research.

Funeral Services will be held at St. Christopher's by the River church in Gates Mills, Ohio on Saturday, December 13, 2014 at 10:00 am. Burial will follow at Mt. Zion Cemetery in Pleasant Lake, Indiana.


PDF Printable Version
To order memorial trees or send flowers to the family in memory of Elizabeth Shearer, please visit our flower store.