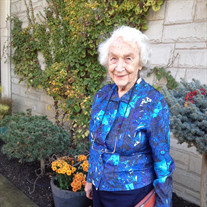 Libby was loved by so many and she loved everyone she knew as well as those she never met. She had a full and happy life due to all of her treasured relationships.

Libby was born on April 14, 1922 in Pulaski, Tennessee to Mary and Gordon Topp. She grew up with three sisters on a beautiful farm in Pulaski, riding horses and playing in the swimming hole that her father would dredge every spring. Libby attended public schools in Pulaski and Lynnville, TN, followed by Peabody College in Nashville Tennessee with a degree in English and Education. She met Robert Lord who was attending Vanderbilt at the same time, and they were married on April 29, 1943. Robert served in WW II and worked in civil engineering while Libby worked as a bank teller and English teacher. Their first child, Gordon Lord, was born in Columbia TN in 1948.

After moving to Washington Indiana in 1950, Libby and Robert had two more children: Mimi in 1951 and Bill in 1954. Robert owned and managed a hardware store in Washington for more than 40 years. Libby helped out at the store while taking care of the children and her mother following a severe stroke. Later, she began teaching again, first in kindergarten for several years and then at Washington High School where she taught English literature and composition for 15 years. Many of her former students and friends recently sent her messages to her Facebook page (under Libby Lord) which you may choose to visit.

Interment will be in Washington, Indiana.