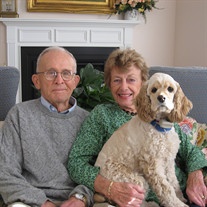 Betty Hollister, devoted wife of Jack, loving mother of John (Cindy), Tom (Diane), Ellen Whelan (Bill) and David (Dana), loving "grandmumz" of Will, Ben, Steve, Samantha, Allison and Andrew died Friday May 19 at the age of 90. Besides her immediate family, she is survived by a sister, six nephews, one niece, and two twin great grandsons.

Born February 2, 1927 in London, Ontario, she was the first of three to Bess and Tom Boyle. Betty attended Central Collegiate High School in London. She became the first in her family to go to college, attending the University of Western Ontario. Summers were spent as a camper, and then counselor, at Camp Orendaga on the shore of Lake Huron.

Betty became an accomplished swimmer at Orendaga. She swam and dove for her University's women's swim team. Equally athletic out of the water, she was a cheerleader for the football team.

Upon graduation in 1949, she took a job in the Alumni Office. There she met recent Yale grad and war veteran Jack Hollister who had been hired as an Assistant Football Coach. Though not granted a weekend date until after their engagement, Jack nevertheless managed to somehow woo Betty in to marriage.

Married in April, 1950, they initially settled in Ishpeming where Jack went to work for Cleveland Cliffs. Jack's promotion to the sales office led to a move to Cleveland where Betty and Jack lived the rest of their lives and raised their four children.

While actively involved in her husband's & children's lives, it was the great outdoors that was Betty's higher calling. Betty was a devoted Volunteer and then Life Trustee of the Cleveland Museum of Natural History, a 50 year Life Member of the Garden Club of Cleveland, was active in the Cleveland Botanical Garden, started the annual Holden Arboreteum Plant Sale, hosted the annual Audubon Bird Count for over 30 years, and started her own architectural landscaping business. Upon "retirement" to South Franklin Circle, Betty's first act as a resident was to co-write a book on the facility's landscape architecture. Caged inside by Cleveland's harsh winters, she took up American Contract Bridge and became a Life Master.

All six grandchildren came to relish their visits to the welcoming homestead with "GrandMumz" and "GranCat." Betty led the planning and organizing of all family outings, creating unforgettable memories.

In her last days, Betty was surrounded by her family and friends who lovingly gathered to both honor her for a life well-lived, and to thank her for all she had done for them. Knowing that she was fading fast, Betty willed herself to survive long enough for one last visit from her far-flung clan before passing away shortly after their departure.

Memorial services will be held at 2:00 pm at the Federated Church of Chagrin Falls on Sunday, June 18, with a reception immediately following at South Franklin Circle, 16575 Franklin St., Chagrin Falls, OH 44023 (Community Center Building). Betty will reside next to husband Jack in the Hunting Valley graveyard whose landscape she designed.

The family asks that in lieu of flowers, contributions in her memory be made to the Cleveland Museum of Natural History.